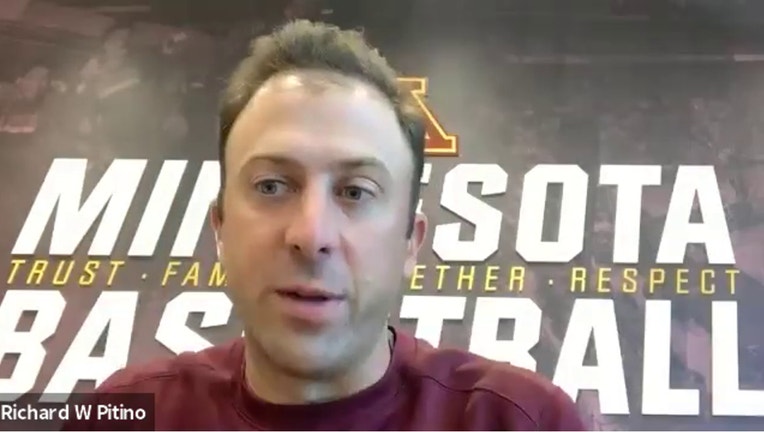 MINNEAPOLIS - The University of Minnesota men’s basketball team doesn’t know when its first game will be or who they will face, but Richard Pitino and the Gophers officially started their 2020-21 season with their first practice at Athletes Village on Thursday.

The team actually was cleared to start Wednesday, but they’re limited to 30 practices over 42 days before the season starts, so they have to plan their schedule accordingly. In a time where they’re dealing with the COVID-19 pandemic, every day presents a new challenge.

“We’re all kind of trying to navigate our way through that as well as get better, so it’s very exciting to get back on the practice court for sure. I know these guys are excited to make it work,” Pition said Thursday morning.

Pitino couldn’t even confirm if the Gophers are still participating in the Hall of Fame Tipoff Classic. It’s a preseason tournament that tentatively includes Minnesota, Albany, Central Florida, Lehigh, Long Island, Marquette, Rhode Island and Quinnipiac. Marquette is at least one program to opt out of the event due to COVID-19 concerns.

“We’re not even close to confirming that yet. We want what’s best for the players from a safety standpoint,” Pitino said.

What we do know is that Pitino is close to submitting paperwork on a waiver that would make transfer Both Gach, an Austin native who played at Utah the last two seasons, immediately eligible this season for the Gophers. He started 25 games last year for the Utes, playing more than 30 minutes per game and averaging 10.7 points, 3.6 rebounds and 2.9 assists per game.

If cleared, Gach will likely make an immediate impact for the Gophers and could be a starter at the wing. Pitino is cautiously optimistic Gach will be cleared. Liam Robbins, a center and transfer from Drake, has already been cleared to play and will likely replace Daniel Oturu in the starting lineup.

“I don’t see why there should be any type of drop-off to be honest. He’s a Big Ten type player. There will be an adjustment period, but he’s stood out in practice. I think he’s one of the best transfers in the country,” Pitino said.

With 351 Division I programs, a bubble likely isn’t feasible. Pitino says at some point, they have to anticipate someone will test positive.

“I don’t think it’s possible. You’re going to have to anticipate some type of disruption, that’s just the reality of it,” Pitino said.

Pitino is hoping to have a 27-game regular season schedule, which would include full Big Ten schedule and seven non-conference games.

He’s also hopeful he’ll have a fully-healthy Eric Curry when the regular season starts. Curry missed all of last season after a knee injury during fall workouts. It’s his third major injury at Minnesota.

Pitino said he’s been able to practice for about 90 minutes at a time, but they’re bringing him along slowly and cautiously.

“His attitude throughout this whole process has been amazing. Just to deal with all the adversity he’s dealt with and never really, he’s never made it about himself,” Pitino said. “He looks good when he’s fresh, but he understandably gets tired because he hasn’t been in full-go mode in practice.”

The Gophers are coming off a 15-16 season that ended early in the Big Ten Tournament due to the COVID-19 pandemic.