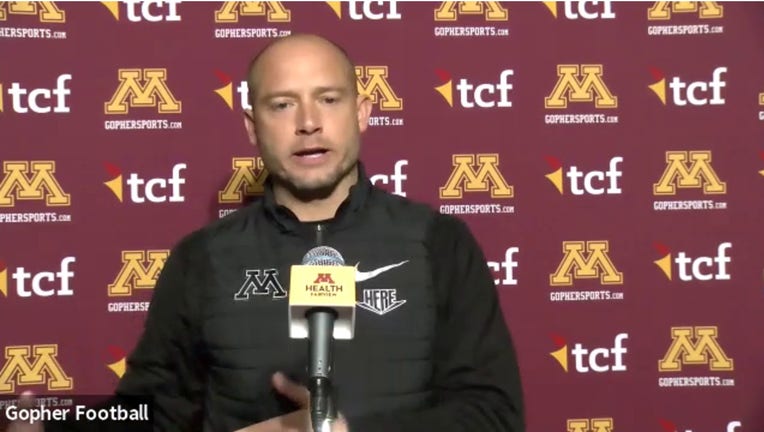 P.J. Fleck spoke with reporters Monday about the Gophers' loss to Iowa and the team's 1-3 start.

MINNEAPOLIS - There was plenty of blame to go around last Friday after the Gophers didn’t put up much of a fight in a 35-7 loss to Iowa at TCF Bank Stadium.

For the sixth straight year, Floyd of Rosedale headed back south on Interstate 35 and was put back in a trophy case in Iowa City. P.J. Fleck is now 0-4 against Iowa for his career, and 1-6 combined against the Hawkeyes and Wisconsin.

It’s been a season of disappointment on multiple levels through four games, after finishing 11-2 last year. Fleck, the face and the head coach of the program, put the blame squarely on himself on Monday.

“It all starts with me, 100 percent. Everything that happened on Friday night, just like everything that’s happened this year is 100 percent my responsibility. I think there was just too much inconsistency,” Fleck said.

Gophers fans have come to expect more than the display that was put on the field Friday. Fleck said in reviewing film, he saw as many as eight drops by wide receivers. Minnesota had eight penalties in the first half, including a pair of 15-yard flags that set them back after a James Gordon interception. They had two drives of 10-plus minutes, including a 17-play drive in the third quarter, that ended without points.

The defense, for the third time in four games, allowed more than 200 yards rushing and chunk plays all over the field. Iowa ran for nearly seven yards per carry Friday night, and dominated the line of scrimmage.

The defensive issues are well-chronicled by now. Minnesota is replacing seven defensive starters from last year, five of which are playing the NFL. Fleck played as many as six freshmen or redshirt freshman on defense Friday. His plea to fans, who want to see more wins over rivals, is patience.

“You might not see it yet, but it’ll hit and it’ll happen and we’ll see the result, the fruit of the labor. Everybody wants to see it sooner, so do I, so do our players,” Fleck said. “But it’s that developmental program and some of these challenges that you have when you are that, that’s what you’re going to constantly fight through and that’s OK.”

On offense, Minnesota struggled to move the ball when the game mattered. The No. 1 rushing defense in the Big Ten limited Mo Ibrahim, who had consecutive 200-yard games, to 145 yards and kept him out of the end zone.

Tanner Morgan had arguably his worst game of 2020. He finished 16-of-33 for 167 yards, a late touchdown and two interceptions. He was also sacked four times.

Receivers not named Rashod Bateman had a combined eight catches for 56 yards. Morgan’s inconsistent play had fans clamoring to see back-up Zack Annexstad, and questioning play-caller Mike Sanford Jr. Fleck gave no indications Monday he's going to bench Morgan, saying Annexstad is "one play away," meaning Morgan would have to lose his job via injury.

Morgan took the blame himself on Monday, calling his two interceptions “completely unacceptable.”

For the season, Morgan is completing just 57 percent of his passes and has four touchdowns, and four interceptions.

“We 100 percent truly believe and trust in our coaching staff, we believe in each other, we just have to execute better. That runs through me, that starts with me so for us to be better, I have to be better,” Morgan said.

The Gophers are young on defense, they’re inexperienced on defense and they’re inconsistent in all three phases. They’ve also been hit by COVID-19 cases, but so have most programs in college football.

That leads to a 1-3 start, and questions on if the program is regressing after a historic 2019 season.

“You can see the talent, you can see the skillset, but you have to now develop that. It just goes back to every year is its own entity,” Fleck said. “This counts, and I’m held accountable for that result on the field, period.”