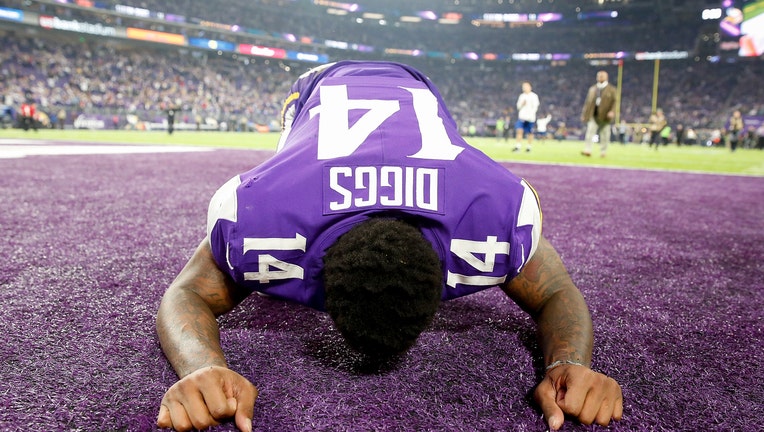 MINNEAPOLIS - It’s a "where were you" type of moment that Minnesota Vikings fans who saw it and witnessed it with their own eyes will never forget the rest of their lives.

On this date three years ago, Case Keenum hit Stefon Diggs for a 61-yard walk-off touchdown to lift the Vikings over the New Orleans Saints in the NFC Divisional Playoffs. The play, tabbed the "Minneapolis Miracle" put the Vikings one win away from playing a virtual home game in the Super Bowl.

Stefon Diggs says quarterback Case Keenum gave him a chance in the last few seconds of the Minnesota Vikings' playoff game against the New Orleans Saints.

The play and ensuing celebration is plastered around TCO Performance Center in Eagan in posters and a mural.

That year, the Philadelphia Eagles beat the New England Patriots at U.S. Bank Stadium to win the Vince Lombardi Trophy.

Now, neither Keenum nor Diggs are still with the Vikings. Keenum started 14 games that season after Sam Bradford, who the Vikings hoped would replace the injured Teddy Bridgewater, went down for the season with his own knee injury. The Vikings traded Diggs this offseason for four draft picks, one of which went to Justin Jefferson, who earned Pro Bowl and All-Pro honors this year and is a favorite to win NFC Offensive Rookie of the Year.

The "Minneapolis Miracle" prompted the Vikings to use the slogan "Bring it Home" as marketing material in the week leading up to the game at Philadelphia. Grown men watching the play live shed tears, some jumped in ice cold snowbanks and celebrations went viral on social media.

Vikings fans would like to forget the rest. A week later, one of their worst performances in franchise history in a 38-7 loss at Philadelphia for the NFC title. But for one day, one game, the Vikings beat the odds, did something they never do and bedlam ensued at U.S. Bank Stadium.

On the complete opposite end of the spectrum, 20 years ago on this date the Vikings lost at the New York Giants 41-0 in the NFC title game. It's a game we affectionately label "41-donut."

On Jan. 14, 2001, Kerry Collins passed for 389 yards and five touchdowns. Ike Hilliard had 10 catches for 155 yards and two scores. The Vikings managed nine first downs, 114 total yards and were 1-for-8 on third down. Daunte Culpepper threw three interceptions, was sacked four times and had a 13.7 rating.

Only the Vikings could have two playoff results on the complete opposite end of the spectrum on the same date.