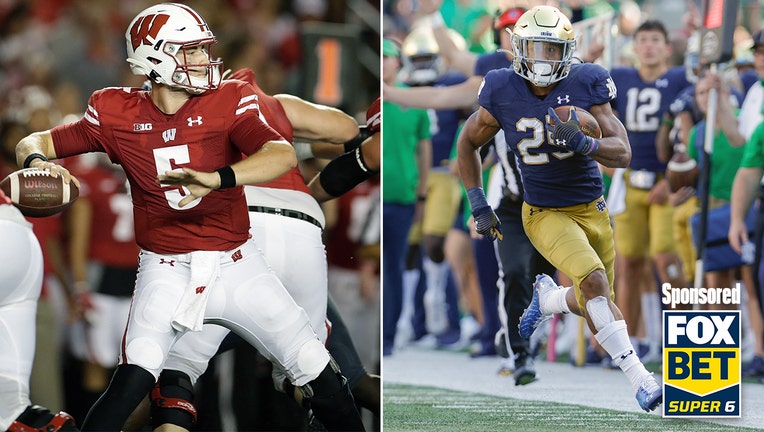 Chicago has often been the stage for big events in America’s Heartland. That's what makes the location for Saturday's showdown between Wisconsin and Notre Dame so appropriate.

On late Saturday morning at Soldier Field, two old powers will meet along the shores of Lake Michigan with hopes of finding a way into the College Football Playoff.

Neither squad has found its footing yet.

Notre Dame is 3-0, but those wins over Florida State, Toledo and Purdue were all shaky. The Irish's offensive line, which has become an NFL pipeline under Brian Kelly, has been depleted by injury and graduation.

Wisconsin’s opening loss to Penn State (16-10) was jolting but doesn’t look too bad now after the Lions beat Auburn last week. Still, the Badgers' 34-7 win over Eastern Michigan was more businesslike than impressive.

Notre Dame-Wisconsin on FOX’s Big Noon Saturday (12 p.m. ET) is another chance for you to win some serious cash with FOX Bet Super 6. Just answer all six questions correctly and you could win $10,000. It’s quick, easy, fun and free to play by downloading the FOX Bet Super 6 app on your phone or tablet.

Here are this week’s questions, along with some predictions.

What will be the total combined score at the half?

Neither side appears to have a stellar offensive unit. Notre Dame had moments against Purdue and Florida State. Wisconsin is notoriously a grind-it-out squad. We’re going low on this number.

Which team will have the longest completion and how many yards will it be?

The options: Notre Dame, Wisconsin or Tie with ranges from 0-61+

Graham Mertz’s longest pass play for the Badgers this year is 23 yards. Notre Dame starter Jack Coan – a former Badger – has a 62-yard pass play, and his backup Tyler Buchner has another of 55 yards. In other words, it’s far more likely for the Irish to connect with the big play. The question is: How big against the Wisconsin defense?

Which team will have the most rushing yards and how many will they have?

The options: Notre Dame, Wisconsin or Tie with ranges from 0-276

Kyren Williams was a big factor in Notre Dame’s push to the College Football Playoff last year, but that was behind an NFL-quality offensive line. This year, not so much. (Williams did show glimpses against Purdue last week, including a spectacular 51-yard run.) Wisconsin is more likely to run the ball, and Chez Melluzi is averaging 5.2 yards per carry. Advantage, Badgers.

Which team will have the most passing yards and how many will they have?

The options: Notre Dame, Wisconsin, Tie with ranges from 0-351+

If a quarterback is likely to throw for a huge number, it figures to be Coan, who has shown the gumption to stand in the pocket and deliver big throws accurately. Mertz probably doesn’t have the weapons on the outside that match up to the Irish receivers.

Which team will have the most offensive yards and how many will they have?

The options: Notre Dame, Wisconsin, Tie with ranges from 0-526+ yards

Wisconsin has more balance in its offensive attack than the Irish have shown. One wild card: The Badgers' defense has been significantly better at not allowing the big play and was able to keep Penn State’s offense – which is probably better than Notre Dame’s right now – in check.

The options: Notre Dame or Wisconsin and with spreads of 1-21+

Here’s the thing about Notre Dame. It hasn't played well enough to be taken as a serious playoff contender. And yet, unlike Ohio State or Clemson, the Irish haven’t been hit in the loss column. The Irish have their season in front of them for the next five weeks: Wisconsin, Cincinnati, at Virginia Tech, USC and North Carolina. Everyone has known about that since the start of the year. So can they get the act cleaned up?

Download the FOX Bet Super 6 app now to predict the outcomes of the biggest events in sports, and you could win thousands of dollars absolutely for free each and every week. Just download and play!