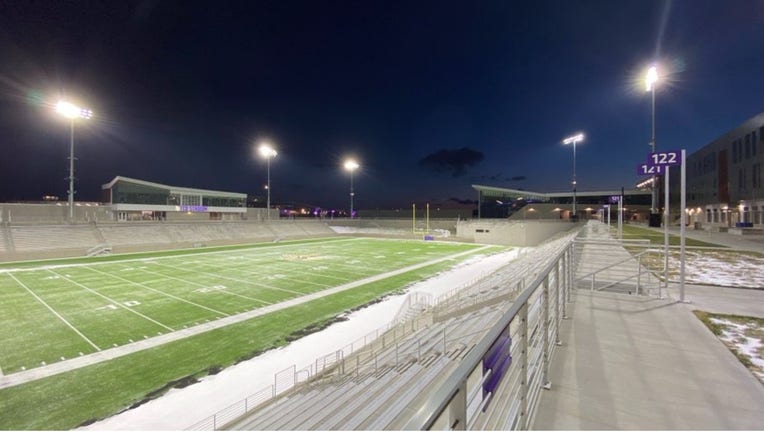 The Minnesota Vikings lit TCO Stadium Monday night to honor the 2020 high school seniors who are without spring activities due to the Coronavirus pandemic ((credit: Minnesota Vikings/Twitter))

MINNEAPOLIS - The NFL appears to be entering the next phase of opening team facilities across the country, despite concerns with the Covid-19 pandemic.

In a memo the league sent to general managers and head coaches on Thursday, coaches and select players could be allowed in team facilities as early as next week. League officials are in contact with Governors across the country on which teams can allow coaches and players. Teams must submit plans to the NFL on how they plan to stay within Covid-19 guidelines to allow limited coaches and players in facilities to finish the off-season program.

Earlier this month, the league allowed facilities to reopen to staff of no more than 50 percent building occupancy, and no more than 75 total staff members while staying in compliance with state and local Covid-19 guidelines. The Minnesota Vikings facility, TCO Performance Center, remained closed to anyone other than essential staff and players needed treatment or rehab due to the “Stay safe Minnesota” order issued by Governor Tim Walz.

Also in the memo the NFL sent to teams on Thursday, the league said that on June 1, teams can open ticket offices, retail shops and other customer-facing facilities that are in full compliance with state and local Covid-19 guidelines. Employees of those operations will count against the 75 maximum or 50 percent maximum capacity of the building.

We don’t know when TCO Performance Center will start opening up to players and coaches, but it’s becoming more and more likely that a full squad practice won’t happen until the NFL and players’ association agree on a format for training camp.

"I’m very fortunate that Eric Sugarman, our head trainer, is a head of one of the committees. We have several committees while we’re trying to figure out exactly the process that we go through and the different things that you have to do. We’re preparing like we’re going to get ready for regular training camp," Vikings coach Mike Zimmer told Rich Eisen on his radio show Friday morning. "It may not happen that way, we’ll just have to adapt to it. We’re preparing just like it will be a normal season now. It would basically suck to play without fans, but if that’s what we have to do then that’s what we’ll do."