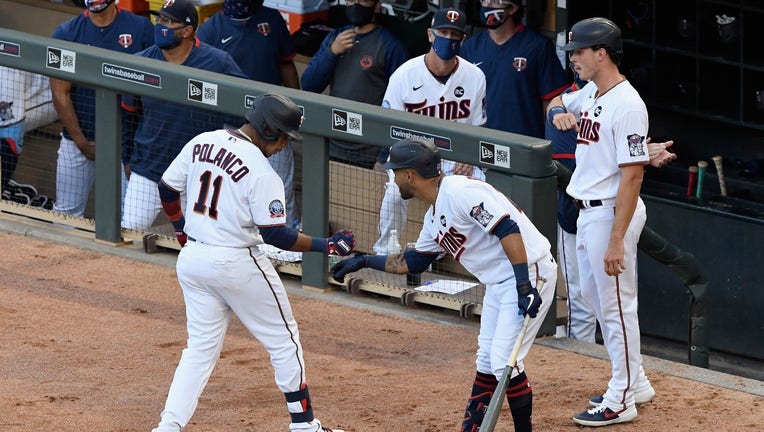 Eddie Rosario #20 and Max Kepler #26 of the Minnesota Twins congratulate teammate Jorge Polanco #11 on his two-run home run against the St. Louis Cardinals during the second inning of the home opener at Target Field on July 28, 2020 in Minneapolis, M ((Photo by Hannah Foslien/Getty Images))

MINNEAPOLIS - There wasn’t much that was normal about the 2020 Minnesota Twins home opener Tuesday night at Target Field.

It happened in late July instead of early April. No fans in the seats due to the Covid-19 pandemic, instead there were fat-head style cutouts of former Twins players in the Champions Club behind home plate, and ads in the outfield seats.

No cold beer, no hot dogs and no peanuts and cracker jacks. Both teams were introduced like it was Opening Day, and players took their baselines waving to fans that weren’t there. The game stopped at 8:46 p.m. to have a moment of silence for George Floyd, killed in an officer-involved death on Memorial Day that led to civil unrest in Minneapolis.

On the field, the Twins saw what they hope is a new normal for the season. Homer Bailey went five strong innings, Jorge Polanco and Josh Donaldson homered and the Twins used a five-run second inning to beat the St. Louis Cardinals 6-3.

The Twins scored nine runs in the first two innings Sunday in Chicago. Five in the second Tuesday night proved to be enough.

“Our guys have gone out there ready to hit from the first pitch, and it’s been a very good thing for us in getting our pitchers those cushions. It’s important, it always is,” Twins manager Rocco Baldelli said.

It started in the second inning with Miguel Sano’s first hit of the season, a double down the left field line. Byron Buxton, in his first start of the season, hit a grounder to short, and Luis Arraez beat the throw home for a 1-0 lead. Max Kepler singled to score Sano, and Josh Donaldson hit a sacrifice fly for a 3-0 lead.

It should’ve been the third out of the inning, and Jorge Polanco took advantage, sending a two-run blast to the plaza in right for a 5-0 lead. Six different Twins have home runs after Tuesday’s win.

Donaldson has hit plenty of home runs at Target Field as an opponent, but got his first in a Twins’ uniform Tuesday. He hit a solo shot to right in the fifth that gave the Twins a 6-0 lead.

The bomba siren played as he went around the bases and eventually high-fived teammates, even if he doesn’t recall hearing it.

“I was pretty excited going around the bases, but I’ll listen for it next time. I was excited about it,” Donaldson said.

It was plenty of support for Bailey, who went five strong innings, allowing two earned runs on four hits while striking out two and walking two. He had 46 strikes on 80 pitches, and his only real blemish was a two-run homer to Tyler O’Neill in the fifth.

All Bailey cares about is the win. It’s his first in eight starts against the Cardinals, going back to his National League days.

“I like the score after the ninth inning and that’s the most important thing. Overall good to get our first home win our first game here, and start rolling with this momentum that we’ve accumulated,” Bailey said. “I’m going to enjoy this one a lot, it’s a long time coming.”

Baldelli said it was similar to the Bailey he saw at Spring Training.

“Homer came out very sharp. We got a chance to see it in an actual game today,” Baldelli said.

The Twins improve to 3-1, with seven games to go on the current home stand. They’re trying to make the best of a difficult situation with the Covid-19 pandemic, and frankly, they’re happy to still be playing after the Miami Marlins had 17 players and staff test positive in recent days.

“I think at the end of the day we have to make the best of the situation and you have to try to create a positive environment. We’re trying to create that environment in our dugout, on the field and in our preparation,” Donaldson said.