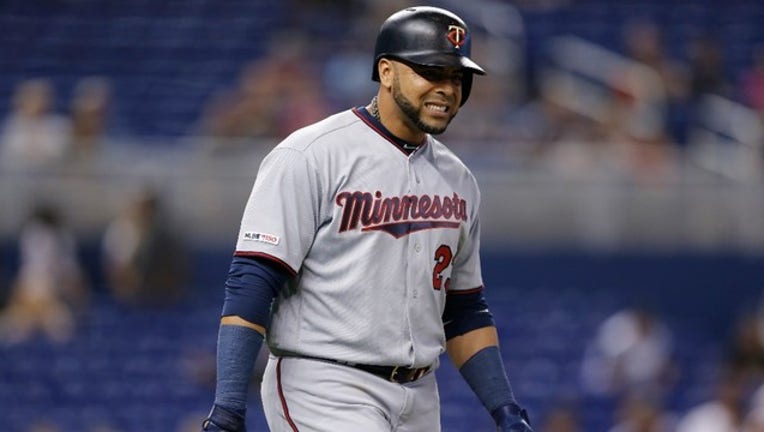 Nelson Cruz #23 of the Minnesota Twins reacts after being hit by a pitch against the Miami Marlins at Marlins Park on August 01, 2019 in Miami, Florida. (Photo by Michael Reaves/Getty Images)

MINNEAPOLIS (FOX 9) - The Minnesota Twins got some very good news Monday about one of their top power hitters currently battling injury.

Nelson Cruz saw a hand specialist on Monday in New York after injuring his left wrist on a swing and miss in the series against the Cleveland Indians. It was the same wrist he injured earlier this season, which put him on the injured list.

This time around, Cruz ruptured a tendon in his left wrist. It's actually the same injury that former Twins slugger Justin Morneau suffered during the 2012 season, and he played the rest of the season through it pain-free.

Cruz saw Dr. Thomas Graham on Monday, and was cleared to resume his hitting program and baseball activities. Graham determined Cruz will not need surgery, and he can resume team activities on Tuesday He will join the team in Milwaukee as the Twins face the Brewers in a two-game interleague series. It's not known when Cruz will actually return to the lineup. He's eligible to come off the injured list on Aug. 19.

Cruz is tied with Max Kepler for the team lead with 32 home runs on the season. He's hitting .294 and slugging .650 in 87 games this season. He's also hit 9 doubles and is third on the Twins with 76 RBI. Cruz has hit 16 home runs in 25 games since the All-Star break.

The Twins also released their 2020 regular season schedule on Monday. They'll start with their earliest Opening Day ever, traveling west to face the Oakland Athletics on March 26. It's the first of seven games on the West Coast to open the season.

The Twins' home opener will be against the Oakland A's on April 2, a home stand that includes the A's and Cleveland Indians.

With 44 regular season games left, the Twins and Indians are tied in the American League Central Division with identical 71-47 records. They have six more meetings this season, with the next three at Target Field.