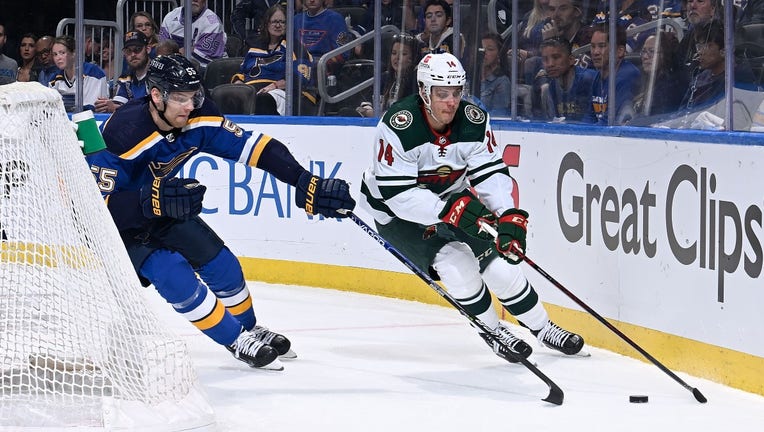 Joel Eriksson Ek #14 of the Minnesota Wild controls the puck as Colton Parayko #55 of the St. Louis Blues pressures in Game Four of the First Round of the 2022 Stanley Cup Playoffs at the Enterprise Center on May 8, 2022 in St. Louis, Missouri.  ((Photo by Scott Rovak/NHLI via Getty Images))

MINNEAPOLIS - The Minnesota Wild will host the St. Louis Blues for Game 5 Tuesday night, but it won’t be for a chance to close out the series and move on in the Stanley Cup Playoffs.

The Blues got a pair of second period goals in 54 seconds in the second period, and added empty-net and power-play goals in the third to pull away for a 5-2 win over the Wild in Game 4 on Sunday at Enterprise Center. The series is tied 2-2 heading back to St. Paul. If it requires seven games to be decided, two of the next three are at Xcel Energy Center.

David Perron and Jordan Kyrou each scored twice for the Blues. St. Louis got the win despite missing four defensemen, and starting back-up goaltender Jordan Binnington, who had lost nine straight playoff starts entering Sunday. He finished with 28 saves.

The Wild got goals from Kirill Kaprizov to tie the game 1-1 in the first period, and Matt Boldy early in the third period that cut their deficit to 3-2. Kaprizov's fifth goal of the series joins him with Marian Gaborik and Wes Walz for the most in a playoff series in franchise history. It was Boldy’s first career playoff goal.

The Blues scored twice 54 seconds apart in the second period on goals from Perron and Kyrou to break open a 1-1 tie. Perron gave St. Louis a 2-1 lead at the 10:30 mark. After his initial shot was saved, a rebound try went in off Marcus Foligno’s skate. Kyrou then scored his second of the night, beating Marc-Andre Fleury with a backhand shot after Dumba turned the puck over on a clearing attempt.

The Wild had a chance to cut into the deficit late in the period on a 5-on-3 advantage for 16 seconds, but came up empty. The Wild had 30 shots on goal in the game, and at least 20 others that missed the net.

"We had good looks, we just missed the net. We just didn’t hit the net where we could get second, third opportunities," Evason said.

Boldy scored at 2:39 of the third period to get the Wild within 3-2, tapping in a rebound on a loose puck after a scrum in front of the net.

"It’s nice, but obviously would’ve been nice to get a win," Boldy said.

Perron’s second goal of the night and fifth in the series came at 18:02 of the third period with the Wild net empty to give the Blues a 4-2 lead and seal the game. Ryan O’Reilly added a power-play goal 58 seconds later.

It wasn’t going to be a fast series. It’s probably going the full seven games. But a win Sunday would’ve given the Wild its second road playoff win, and a chance to eliminate the Blues on their home ice Tuesday night. They’re now guaranteed to head back to St. Louis on Thursday.

The Wild finished second in the Western Conference in the regular season, with their 31-8-2 mark at Xcel Energy Center playing a large part.

"We’re confident but we know we have to work it into existence. We’re always happy to go home and get in front of our fans," Dumba said.