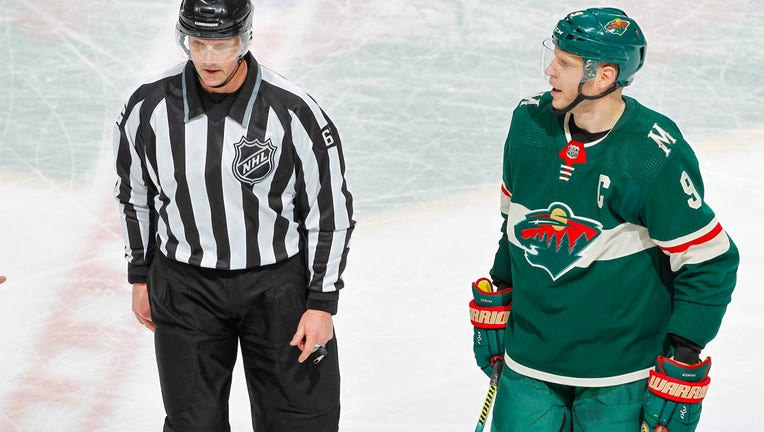 Mikko Koivu #9 of the Minnesota Wild talks with an official against the Boston Bruins during the game at the Xcel Energy Center on February 1, 2019 in Saint Paul, Minnesota.  ((Photo by Bruce Kluckhohn/NHLI via Getty Images))

MINNEAPOLIS - The Minnesota Wild announced on Monday it will retire the No. 9 jersey of former captain Mikko Koivu at a pregame ceremony before the team hosts the Nashville Predators on March 13.

Koivu’s No. 9 will be the first jersey retired in franchise history.

"Mikko did so many great things for our organization on the ice and in our community during his 15-year career here. He truly deserves this honor and I look forward to celebrating this historic moment with his family and all our passionate fans at Xcel Energy Center on March 13," Wild owner Craig Leipold said in a statement.

Koivu played 15 seasons with the Wild and is the franchise’s all-time leader with 1,028 games played, assists with 504, points with 709, 251 power-play points and 153 multi-point games. He’s second in team history with 205 goals, 60 power-play goals, 28 playoff points and is tied for second with five overtime goals. He’s also third with 33 game-winning goals.

"No one worked harder than Mikko during his time with the Minnesota Wild," said Wild General Manger Bill Guerin in a statement. "He was a fiery competitor and a fantastic captain both on and off the ice. Mikko is the franchise leader in so many categories, but the impact he made in our community and the connections he made with Wild fans, will live on forever. We look forward to sharing this special honor with Mikko and all of our great fans on March 13."

The Wild drafted Koivu with the No. 6 overall pick in the 2001 NHL Draft. After 15 seasons in Minnesota, Koivu signed with the Columbus Blue Jackets in October of 2020. He played seven games before retiring back in February.