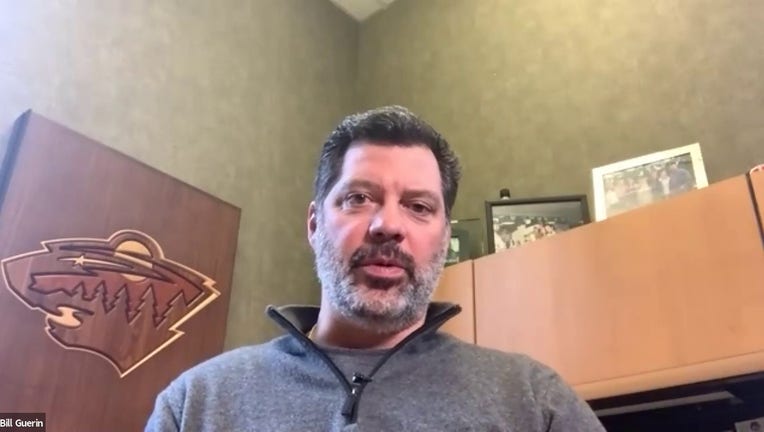 Wild GM Bill Guerin spoke with reporters on Monday as the team gears up for training camp on Jan. 3, and the start of a 56-game season on Jan. 13.

MINNEAPOLIS - There was nothing normal about the 2020 National Hockey League season, once March 11 hit.

The Minnesota Wild were about to hit the ice for morning skate at Xcel Energy Center ahead of facing the Las Vegas Golden Knights, when the NHL put the season on pause due to the COVID-19 pandemic. Four months later, the Wild were in the Edmonton bubble, and sent home after losing to the Vancouver Canucks in four games.

With the NHL’s announcement Sunday, we now know how the 2021 season is going to look, and it’s going to be a lot different. Welcome to playing sports in the middle of a pandemic.

"I think everybody can say that they’ve learned to be flexible and expect the unexpected. We’ll be ready to go and we know it’s a different world that we’re living in and working in right now, so we just have to be able to roll with the punches," said Wild General Manager Bill Guerin, speaking with reporters Monday afternoon on Zoom.

Many Wild players are already skating on their own at TRIA Rink. The team will convene for training camp on Jan. 3, and it won’t last long. A 56-game regular season will start Jan. 13.

Wild fans will need to have extra coffee on hand this season, as plenty of late nights are ahead. The Wild have been moved to the West Division. Their regular opponents are Anaheim, Arizona, Colorado, Los Angeles, San Jose, St. Louis and Las Vegas, which they will all face eight times.

Plenty of late night starts on the road are ahead for the Wild. Guerin isn’t worried about it, and won’t let it be an excuse.

"It doesn’t concern me. We travel on great planes, we stay in great hotels, we eat properly. There will be plenty of time to acclimate to different time zones. If you’re in the West at all, your travel is tough." Guerin said. "That’s just the way it is. I’m not worried about it at all."

Guerin also isn’t concerned about the shortened season, which will feature back-to-backs and stretches where the Wild play three games in four nights. He cited winning the Stanley Cup with the New Jersey Devils in 1995, which was a 48-game regular season.

After the 56-game regular season concludes, the Stanley Cup Playoffs will feature a 16-team tournament, consisting of the top four teams in each division. All series will be best-of-seven, crowning a champion with the hopes of returning to a more normal schedule with the 2021-22 season.

The Wild went through a fair amount of turbulence last season. Guerin fired Bruce Boudreau, eventually naming Dean Evason the full-time head coach. There’s been roster turnover, and now a new goalie to start the season with Alex Stalock out injured and Devan Dubnyk leaving the team in the offseason.

There will be COVID-19 protocols in place to start the season, and games played in empty arenas. But the team’s goals and expectations aren’t changing.

"This is another season in the National Hockey League and we expect everybody with the Minnesota Wild to compete, and compete for a championship, bring their best every night," Guerin said. "Expectations are the same, if anything, this is when we find out the type of guys that we really have. It’s going to be tough, but it also can be really rewarding."

Other than injuries to Stalock and Mats Zuccarello, Guerin doesn’t expect any other absences before the season. He said Monday he’s not expecting any players to opt out of the season, after there were no opt-outs in the Edmonton bubble.

Ready or not, training camp starts in two weeks.

"I trust these guys that they’re all going to come in in great shape and ready to go. I think they’re all anxious to play," Guerin said.