After three weeks of OTAs, the Minnesota Vikings are wrapping up their offseason workout program with mandatory minicamp at TCO Performance Center in Eagan.

MINNEAPOLIS - The Minnesota Vikings are in the final week of their offseason program, hosting mandatory mini camp Tuesday and Wednesday at TCO Performance Center in Eagan.

The Vikings hosted a special guest for Tuesday’s workout: University of Minnesota football coach PJ Fleck stood on the sidelines, chatted with several coaches, including Kevin O’Connell and watched as the team went through 7-on-7s and situational drills. He paid close attention to the offense, and got a chance to catch up with one of his former players in defensive lineman Esezi Otomewo.

The Vikings are implementing a new 3-4 defense with Ed Donatell in charge, and it’s likely to look a lot different than what Mike Zimmer put in place the last eight years. For starters, you won’t see Danielle Hunter playing just on the edge. Same goes for Za’Darius Smith. Outside linebackers coach Mike Smith said after Tuesday’s practice Hunter will line up over the center, the guards and on the edge.

"I think that’s one thing that Danielle and those guys love. I want big, athletic pass rushers. You guys look at my history and where I’ve been, I want to put my best on your worst. Danielle loves it, he’s like a kid in a candy store."

Any time a new head coach takes over, sweeping changes across the staff are normal and expected. There was one coach from the old regime retained by Kevin O’Connell: Wide receivers coach Keenan McCardell. 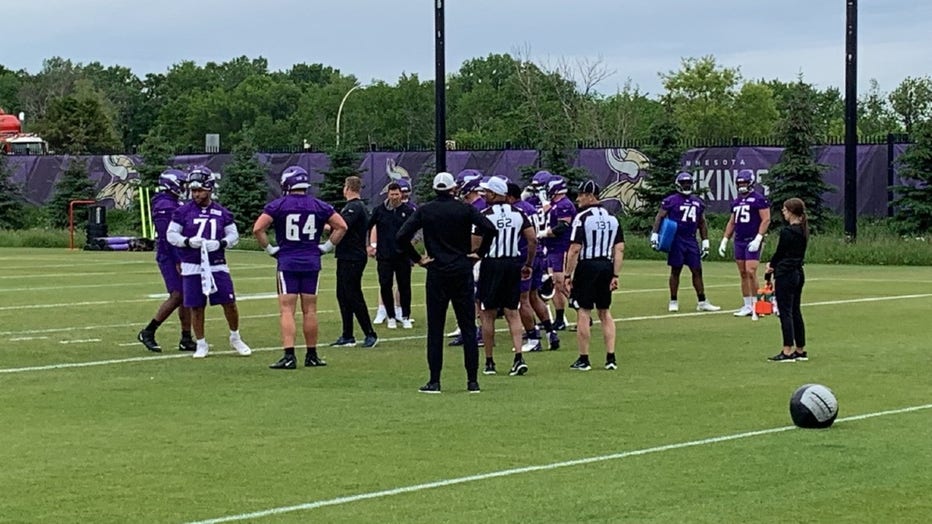 The Minnesota Vikings are wrapping up their first offseason workout program under Kevin O'Connell with mandatory minicamp this week at TCO Performance Center.

That’s after several players went to team management and O’Connell, making their case to keep him.

"It meant a lot to me. I called them all and said ‘You guys didn’t have to do that.’ I think my resume would’ve spoke for itself. If it didn’t, it was just part of the process because in this coaching business, you’ve got to do your job and hope other people see it and see how hard you’re working," McCardell said. "I appreciate all those guys going to bat for me, it shows you what kind of room we have. We take care of each other, we look out after each other, we make sure it’s a family and that’s how we feel."

McCardell is entering his second season with the Vikings, and it only helps that he’s got one of the best wide receiver duos in the NFL in Justin Jefferson and Adam Thielen. The two combined for 175 catches, 2,342 yards and 20 touchdowns last season. Jefferson came 17 yards shy of breaking Randy Moss’s single-season receiving yards record.

One of the more intriguing battles this offseason is at the No. 3 receiver spot. KJ Osborn is back after 50 catches for 655 yards and seven touchdowns. Bisi Johnson is back after tearing his ACL in training camp last year, and they’ll get a push from Ihmir Smith-Marsette, Albert Wilson and possibly rookie Jalen Nailor.

"I tell guys all the time let football handle football. When you get on the grass and compete, the cream always rises to the top," McCardell said. "I tell the guys this all the time that’s down the line that’s probably had a great camp, you’re playing for a job in the National Football League, not just for the Minnesota Vikings. If you go out and play the way we’re coaching you to play and the numbers just don’t fit right, you’ll find a job in this league because it’ll be seen on film."

THE BATTLE AT RIGHT GUARD

Throughout the offseason, four of the offensive line starters have been consistent: Christian Darrisaw (left tackle), Ezra Cleveland (left guard), Garrett Bradbury (center) and Brian O’Neill (right tackle). The competition at right guard appears to be open between Chris Reed, Jesse Davis and rookie Ed Ingram, a second round pick out of LSU.

"We’ve got two vets who have played a lot of football. Have seen, heard a lot of this stuff. They’re helpful in the room for me, and a rookie that we’re all kind of bringing up," offensive line coach Chris Kuper said. "They’ll all get a chance, get a shot at the opportunity. However it shakes out, we’re going to have a really good player there."

The Vikings have one more session on Wednesday, then break for the summer before training camp.