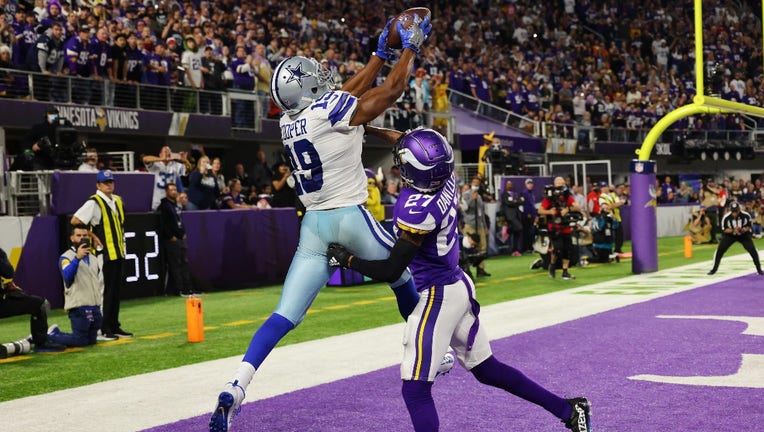 Amari Cooper #19 of the Dallas Cowboys catches a five-yard touchdown pass from Cooper Rush #10 (not pictured) against Cameron Dantzler #27 of the Minnesota Vikings during the fourth quarter at U.S. Bank Stadium on October 31, 2021 in Minneapolis, Min ((Photo by Adam Bettcher/Getty Images))

MINNEAPOLIS - The Minnesota Vikings felt like a confident football team at their bye week, having won two straight to fight back to 3-3 after an 0-2 start.

That’s why Sunday’s 20-16 loss to the Dallas Cowboys on national television, on Halloween night, might have felt more like a horror movie. Despite multiple chances to pull away in the second half, the Vikings’ offense was stagnant while Cooper Rush, not Dak Prescott, led the Cowboys to the game-winning touchdown with 51 seconds to play.

Rush finished with 325 yards and two touchdowns, including the final score to Amari Cooper over Cam Dantzler in coverage. The Vikings drop to 3-4, with their next three games at the Ravens, at the Chargers and home against the NFC North leading Packers. It’s yet another one possession game coming down to the finish, and this time the Vikings didn’t close it out.

"It seems like for many weeks here we’ve had teams on the rope and haven’t been able to finish. We either win them at the end or lose them at the end," Vikings coach Mike Zimmer said. "This was a tough loss tonight. We had a good crowd, it was loud. A home, primetime game and we had plenty of opportunities to win that football game and we didn’t do it. We’re just not as consistent overall as a football team as we need to be."

To add injury to insult, the Vikings lost Danielle Hunter to a shoulder injury in the first half. He didn’t return, and will have an MRI on Monday.

The loss won’t sit well with Vikings’ ownership, or its fan base, who booed the team on multiple occasions Sunday. The Cowboys deemed Prescott inactive with a bad calf after a rigorous pregame workout. Rush was making his first NFL start, and hadn’t thrown a pass since 2017.

He hit Cedrick Wilson for a 72-yard touchdown, beating Mackensie Alexander in coverage, on the third play of the third quarter to tie the game 10-10. His last throw of the night, to Cooper in the corner of the end zone, sent the Vikings to a stunning loss despite throwing two interceptions and being sacked three times.

There’s 10 games left, but there’s little room for error for the Vikings.

"We can’t let this break us. We have however many games left in the regular season. We win, and everything will take care of itself. Just win," said safety Xavier Woods, who had an interception and sack fumble against his former team.

The biggest issues of the night came on offense, and in game management. Kirk Cousins finished the opening drive with a 20-yard strike to Adam Thielen for an early 7-0 lead. The rest of the game? Three Greg Joseph field goals.

Cousins was 9-of-15 for 105 yards in the first half. The second half? He was 16-of-20 for just 79 yards, and under pressure most of the final 30 minutes. His average depth of target was just 4.5 yards. The Vikings’ offense managed just 287 total yards and was 1-for-13 on third down conversions in the game. After the opening drive score, Minnesota punted six times and managed 203 total yards.

Too many times, the Vikings weren't aggressive with their play-calling and threw short of the first down markers in critical third down situations.

Vikings’ fans also booed Zimmer’s game management. Leading 10-3, the Vikings had a chance to add points before the end of the first half. Cousins scrambled for 13 yards, and instead of spiking the ball or using their last timeout, the sideline had issues getting the next play in. Cousins eventually took a knee, and was hot at the sideline going into the half.

His comments about the situation after the game were maybe most concerning.

"I just let Zim handle the timeouts because I never know quite what the coaches want to do with that," Cousins said.

The Cowboys’ game-winning touchdown was set up after the Vikings got a defensive delay of game penalty. Zimmer tried to call consecutive timeouts. The official incorrectly granted the second timeout, and the Vikings got penalized five yards. It should’ve been 3rd-and-16. Instead it was 3rd-and-11, and Rush hit Ezekiel Elliott, who made for defenders miss for a critical third down conversion.

Rush hit Cooper for the game-winner on the next play.

"I screwed up," Zimmer said.

The Vikings had a chance to take control of the game on the drive before, gifted 33 yards because of three Cowboys’ penalties. Minnesota had the ball 1st-and-goal from the 4-yard line, but lost seven yards on consecutive plays before Cousins hit Thielen for a short gain. Joseph came on for a field goal and a 16-13 lead.

With Patrick Peterson on injured reserve, the Vikings’ secondary had its problems against the Cowboys. Cooper, CeeDee Lamb and Wilson combined for 17 catches, 318 yards and two touchdowns.

The Vikings knew they had a brutal four-game stretch coming out of the bye week. After Sunday night’s loss to a back-up quarterback, there’s more questions about where the rest of the season will go, even though there’s still 10 games left. The schedule doesn’t let up any time soon. Next Sunday? At the Baltimore Ravens, who lead the AFC East at 5-2.