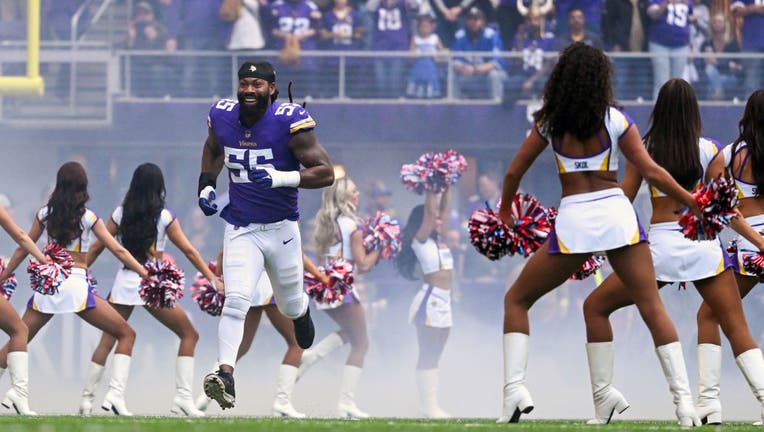 Minnesota Vikings linebacker Za'Darius Smith (55) takes the field before a game between the Minnesota Vikings and Dallas Cowboys on November 20, 2022, at U.S. Bank Stadium in Minneapolis, MN.(Photo by Nick Wosika/Icon Sportswire via Getty Images)

(FOX 9) - The Minnesota Vikings host the New England Patriots Thursday night, looking to get the salty taste out of their mouth after a 40-3 loss to the Dallas Cowboys just four days ago.

RELATED: Vikings aim to respond against Patriots on Thanksgiving after blowout loss to Cowboys

The Vikings are looking for a bounce-back performance after their worst game of the season against the Cowboys. Kirk Cousins was sacked a career-high seven times, and pressured on more than 60 percent of his passes. Dak Prescott threw for 276 yards and two touchdowns, and Tony Pollard had a huge day with 189 total yards and two scores.

The Vikings couldn’t get anything going offensively, largely due to struggles on the offensive line. They’ll get challenged again as the NFL’s sack leader, Matt Judon, is coming to town with the Patriots. Minnesota is seeking its ninth win of the season, and to shake off a rough performance that snapped a seven-game win streak.

And at 10 a.m. on Sunday, tune into Vikings Gameday Live with Mark Rosen, Dawn Mitchell, Ron Johnson, Pete Bercich and Ben Leber. You can watch it live in the player below.