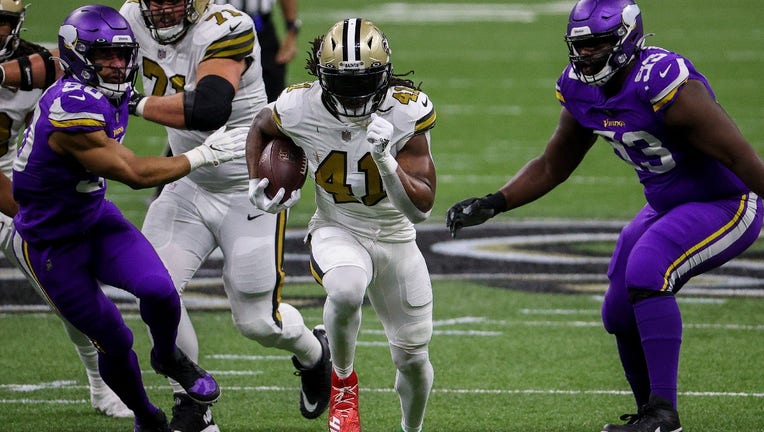 Alvin Kamara #41 of the New Orleans Saints carries the ball during the first quarter against the Minnesota Vikings at Mercedes-Benz Superdome on December 25, 2020 in New Orleans, Louisiana. ((Photo by Chris Graythen/Getty Images))

MINNEAPOLIS - The Minnesota Vikings haven’t looked like a playoff team for much of the 2020 season, and that finality became official in a 52-33 loss at New Orleans on Christmas Day.

In seven seasons with the Vikings, Mike Zimmer’s calling card has been as a defensive guru. Friday, they got run over by Alvin Kamara. He tied an NFL record with six rushing touchdowns, and ran for 155 of the Saints’ 264 rushing yards. New Orleans finished with 583 total yards, the most a Vikings' defense has ever allowed.

The Saints averaged eight yards per play and had 36 first downs.

Zimmer told the NFL Network during training camp, "I’ve never had a bad defense, ever. So I don't see that changing." He was asked about that after Friday's loss.

"Yeah this is a bad defense, worst one I’ve ever had," Zimmer said. "It was embarrassing today. We’re a little undermanned, but that’s still no excuse. Guys put on an NFL jersey, they’ve got to play."

Zimmer doesn’t want to make excuses, but he has a point. The Vikings were without Eric Kendricks for the fourth straight game. They haven’t had Danielle Hunter or Michael Pierce all season. They’ve been without Anthony Barr since Week 2. They haven’t had Mike Hughes for several weeks, cut Holton Hill and rookie Cameron Dantzler has missed time. Troy Dye was out Friday, as was Jalyn Holmes.

The defensive talent is depleted, and the unit broke Friday. They missed tackles, didn’t pressure Drew Brees and got pushed off the line of scrimmage. The 583 yards the Vikings allowed is the most under Zimmer, and it’s the most points they’ve allowed in five decades.

The Vikings knew what was at stake Friday. They needed plenty of help to make the playoffs in the last two games, but that road started by beating the Saints. Now next Sunday’s game at Detroit, another non-playoff team, is a glorified preseason game.

"You’ve got to credit the Saints. They beat us today. It’s tough to now likely be out of the playoffs, I would assume now we are out. We just feel like we let down our fans, and that’s disappointing, gut wrenching," quarterback Kirk Cousins said.

Cousins finished 27-of-41 passing for 291 yards and three touchdowns. He hit Irv Smith Jr. for a pair of scores, and Adam Thielen for the other. Dalvin Cook had 15 carries for 73 yards and a touchdown.

Cousins’ second touchdown of the day to Smith got the Vikings as close as 31-27 late in the third quarter, but they didn’t get closer. Smith, who finished with six catches for 53 yards and the two scores, would trade them for leaving his native New Orleans with a win.

"I’m a competitor, I love to win. Obviously touchdowns are great, but the goal and the objective of the game is to win. We fell short of that today, but it felt good to get into the end zone for sure," Smith said.

The day and the game came down to the inability of the defense to stop Kamara and the run. He scored three times in the first half as the Saints built a 24-14 lead. He went 40 yards untouched up the middle for the game’s opening score, just the start of a huge night. His other scores went for 1, 5, 6, 7 and 3 yards. Taysom Hill added a short touchdown run in the fourth quarter.

Kamara’s fifth touchdown of the game gave the Saints a 38-27 lead with 12:01 to play. It was the first five touchdown game a Vikings’ defense had allowed to a running back since Shaun Alexander in 2002. Kamara himself beat the Vikings, 36-33, and averaged seven yards per carry.

"We’re a little undermanned, but they should play better than that. It wasn’t so much the six touchdowns, it was more that they just mashed us up front," Zimmer said. "We couldn’t slow them down. It was one of those kind of days."

For the second time in three years, the Vikings won’t be in the NFC Playoffs. They won’t switch into offseason mode until after playing the Lions. But after a season that started with talk of contending for a Super Bowl, the best the Vikings can finish is 7-9.

"You come into the season wanting to make it to the final game, do big things. But now at this point, each week is about going out there and representing your brand as a Minnesota Viking and as an individual," Harris said.

The Vikings will become the ninth team in NFL history to have a 1,500-yard rusher in Cook, a 30-touchdown passer in Cousins and finish under .500. It’s on Zimmer and Rick Spielman to fix the defense heading into 2021.