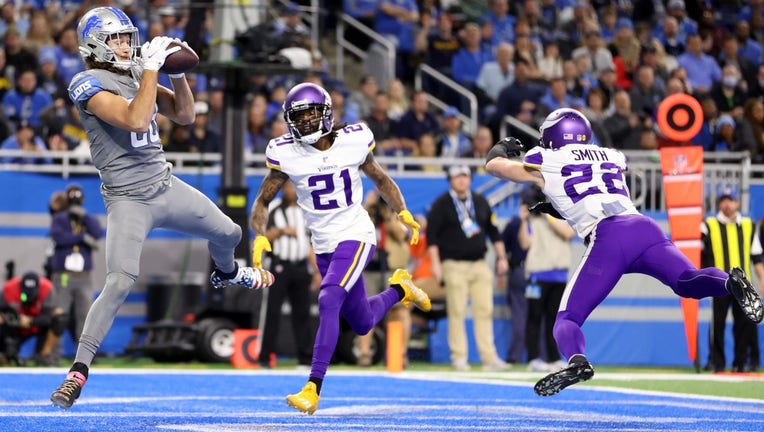 T.J. Hockenson #88 of the Detroit Lions catches the ball for a touchdown over Bashaud Breeland #21 and Harrison Smith #22 of the Minnesota Vikings during the second quarter at Ford Field on December 05, 2021 in Detroit, Michigan.  ((Photo by Gregory Shamus/Getty Images))

MINNEAPOLIS - A chance to go 3-0 in the NFC North Division. A chance to get back to .500 for the third time this season at 6-6, and a chance to remain firmly in the NFC Playoff conversation.

The Minnesota Vikings scored a go-ahead touchdown as Kirk Cousins hit Justin Jefferson from three yards out for a 27-23 lead with 1:50 to play. Then, the Vikings played prevent defense as Jared Goff and the Detroit Lions' offense took the field. As it often does, that defensive approach cost the Vikings a win. Goff drove the Lions 75 yards, and on 4th-and-2 from the 11-yard line, Goff hit Amon-Ra St. Brown in the end zone for the game-winning touchdown as time expired, with Cam Dantzler playing soft coverage.

The Vikings lost to the previously 0-10-1 Lions, who hadn't won a game in 364 days. The Vikings fall to 5-7, and have lost four of their six games coming out of the bye week. They're out on the outside out of the NFC Playoffs, and Mike Zimmer's head coaching seat is starting to get warm with five regular season games left.

The Vikings have had 11 of their 12 games either end with a one-score margin, or come down to the final play.

"You play all these close games, they’re going to come down to you either win or lose. That’s just the way the NFL is," Zimmer said.

It spoiled a huge day for Jefferson, who had 11 catches for 182 yards and the late touchdown.

"If we don't come out with the W, then it's pointless," Jefferson said.

Without Dalvin Cook, Cousins was 30-of-40 passing for 340 yards and two touchdowns. Alexander Mattison had 124 total yards from scrimmage and a rushing touchdown. To add injury to insult, the Vikings’ lost wide receiver Adam Thielen to an ankle injury in the first quarter, after making just one catch. Thielen hobbled off, went to the injury tent and tried to loosen up, but was ruled out for the game at halftime.

Zimmer said after the loss Thielen sprained his ankle. The Vikings' offense went stagnant after Thielen's injury, digging themselves a 20-6 first half hole with the only points coming on a pair of Greg Joseph field goals.

The Vikings were without five defensive starters Sunday. Linebackers Eric Kendricks and Anthony Barr are both hurt, Danielle Hunter is out for the season, Everson Griffen is away from the team and Patrick Peterson is on the reserve/COVID-19 list. Goff threw for 296 yards and three scores. The Lions came into the game not having scored 20 points since Week 1.

Goff hit T.J. Hockenson for a 9-yard score in the second quarter, threading the needle between Bashaud Breeland and Harrison Smith in coverage. The Lions recovered a Cousins' fumble on the next series, a play where the Lions should've been flagged for a facemask on Cousins. The Lions capitalized, with Goff hitting Brock Wright for a 23-yard score to give Detroit a 14-6 lead.

The Lions added a pair of Riley Patterson field goals to lead 20-6 at half, with the Vikings’ offense faltering.

The Vikings were 0-for-3 on two-point conversions on Sunday, and Zimmer wasn't a fan of any of the plays.

"They weren’t very good, I didn’t think. We tried to run it in, smash it down their throats from the 1-yard line and then we tried to hand the ball off to Kene. They weren’t the best," Zimmer said.

Cousins hit Jefferson to give the Vikings a 27-23 lead with 1:50 to play, but after the third failed two-point conversion of the day, Goff had enough time to lead the Lions back down the field for the win. The Vikings got that drive after Dan Campbell's decision to go for it on 4th-and-1 with Detroit at its own 28-yard line. Blake Lynch sacked Goff, forcing and recovering a fumble.

The Vikings have to have a short memory. They come home to host the Pittsburgh Steelers for Thursday Night Football, and Zimmer probably facing questions about his coaching future in Minnesota. For a team with playoff aspirations, Sunday's result to a team that hadn't won a game in a year is unacceptable.

"We’re all disappointed, but we’re going to keep fighting. I anticipate getting quite a few defensive guys back, and we’ll keep fighting. Obviously our backs are to the wall, but they’ve been back against the wall for a while," Zimmer said.