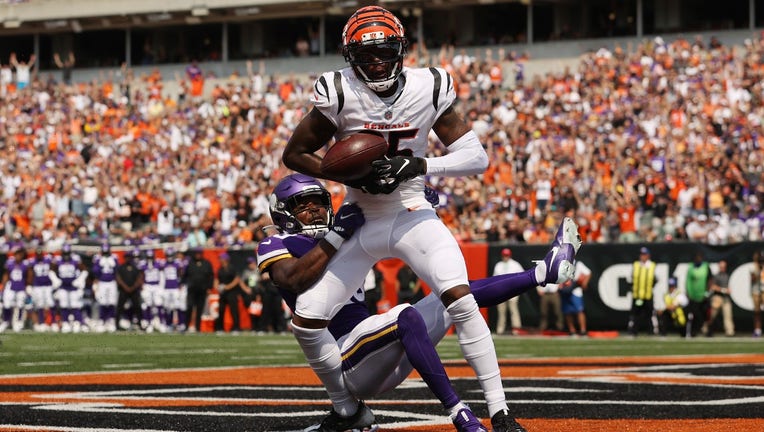 Tee Higgins #85 of the Cincinnati Bengals catches a 2-yard touchdown pass from Joe Burrow #9 (not pictured) during the second quarter against the Minnesota Vikings at Paul Brown Stadium on September 12, 2021 in Cincinnati, Ohio.  ((Photo by Dylan Buell/Getty Images))

MINNEAPOLIS - The 2021 Minnesota Vikings are supposed to be a playoff team centered around Mike Zimmer's rebuilt defense, and an explosive offense featuring the trio of Dalvin Cook, Justin Jefferson and Adam Thielen.

But the Vikings are off to an 0-1 start after a 27-24 loss in overtime at the Cincinnati Bengals on Sunday. It was a game filled with penalties, offensive line struggles, mistakes in the secondary and a costly fumble.

Vikings coach Mike Zimmer after Week 1 loss: 'We shot ourselves in the foot'

After letting the game slip out of their hands, quite literally, head coach Mike Zimmer made no excuses for his team's play during a post-game news conference.

The Vikings were flagged 14 times in the game, 12 that were enforced and 10 of them came in the first half for 91 yards. They had four on the first offensive series alone, with three false starts and a holding call. Joe Burrow threw for 261 yards and two touchdowns, yet Greg Joseph nailed a career-long 53-yard field goal as time expired to send the game to overtime, tied 24-24.

A team that attributed a 7-9 season in 2020 to COVID-19 issues and injuries to key defensive players is off to a rough start.

"Disappointing today. Way too many penalties, shot ourselves in the foot, especially in the first half, way too many times. Just way too many mistakes," Zimmer said. "I have no idea about the false starts. We haven’t had hardly any of those in camp. We’ve been harping on them about where their hand placement is and things like that, we’ve just got to clean that up."

The Vikings were in position to steal a road win before Cook's fumble, which Cincinnati recovered. The play went to a lengthy review as Cook appeared to be down by contact before the ball came out, but it wasn't enough to overturn the call on the field.

McPherson's winning kick was set up by the Bengals going for it on 4th-and-inches. When most were expecting a quarterback sneak, Burrow lofted a pass to C.J. Uzomah for 32 yards.

"There was plenty of mistakes. That’s the tough part about this game is people usually look at the last play of the game. There’s plenty of things that lost us that football game, it wasn’t that one play," wide receiver Adam Thielen said.

Kirk Cousins finished 36-of-49 passing for 351 yards and two touchdowns, both to Thielen. But the offensive line drew 10 of the 12 penalties that were enforced, and Cousins was sacked three times. He also drew public criticism from Zimmer at halftime, as he told the Fox broadcast he was frustrated the Cousins was holding the ball too long.

The Vikings faced six third down situations of at least 15 yards in Sunday’s loss, and five of those six were over 20 yards.

Cincinnati led 14-7 at the half after Burrow hit Ja'Marr Chase for a 50-yard touchdown, beating Bashaud Breeland in coverage. The Vikings tried to answer, but the half ended with Brian O'Neill getting flagged for a false start, and Rashod Hill and Garrett Bradbury getting called for holding.

Mixon scored from two yards out in the third quarter to give the Bengals a 21-7 lead. That's when the Vikings' comeback started.

Facing a 4th-and-3, Cousins hit Thielen for a 24-yard touchdown over the middle, getting the Vikings within 21-14 with 2:24 left in the third quarter.

Cook, who finished with 20 carries for 61 yards, scored a 1-yard touchdown to get the Vikings within 24-21 with 9:23 to play. The Vikings thought they had scored on the play before, with Cousins hitting Justin Jefferson for 34 yards down to the 1-yard line. Zimmer challenged the play thinking the result was a touchdown, but it stood as called and he lost his second timeout.

With the ball at their own 5-yard line and 1:48 left, Cousins and the offense got within field goal range for Joseph, who had to make it from 53 yards twice after the first kick was whistled dead due to a Bengals' timeout.

The Vikings’ defense, featuring six new starters, was unable to make key stops in the big moments Sunday. Mixon ran for 127 yards and a score, and Burrow led the Bengals to 366 total yards, with scores to Tee Higgins and Chase, in his first game back from a major knee injury last season.

In his Vikings' debut, Michael Pierce had two sacks. In his first game in two years, Danielle Hunter finished with six tackles and a sack. Nick Vigil, playing for the injured Anthony Barr, had 10 tackles, a sack and two tackles for loss.

Too many times, penalties had the Vikings' offense backed up and they couldn't find a rhythm. After the loss, Cousins wouldn't attribute the team's offensive struggles to many starters not playing in the preseason. They gave themselves a chance, and couldn't finish.

"I think when you have a chance to win a game in this league, because they are so hard-fought and you put so much into them, any time you can get that close and don’t get it done it hurts," Cousins said. "We’ve all played together for a while so really no excuses. We just have to be better."