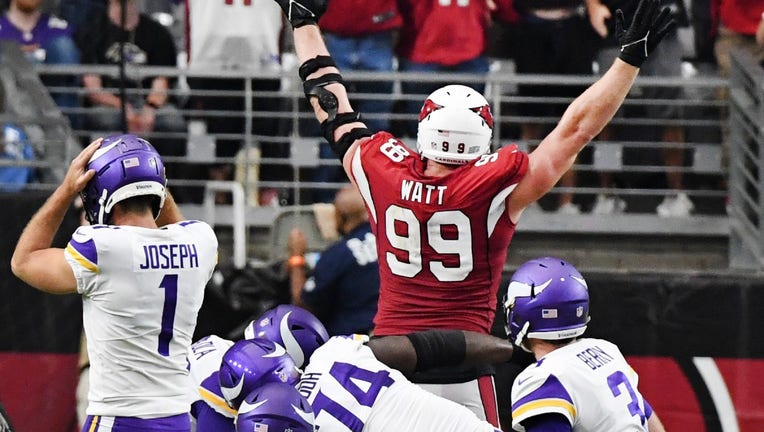 J.J. Watt #99 of the Arizona Cardinals and Greg Joseph #1 of the Minnesota Vikings react after Joseph missed a potential game-winning field goal in the fourth quarter of the game at State Farm Stadium on September 19, 2021 in Glendale, Arizona.  ((Photo by Norm Hall/Getty Images))

MINNEAPOLIS - The Minnesota Vikings left Sunday’s game at the Arizona Cardinals up to Greg Joseph, and the kicker failed to finish off the team's first win of the season.

In a roller-coaster, back-and-forth game, Kirk Cousins led the Vikings into field goal range and ran the clock down for Joseph to try a 37-yard game-winning kick. In an ending that's all too familiar to Vikings' fans, the kicker didn’t come through. Joseph’s kick was clean, but it drifted wide right as time expired. It was as predictable as it was improbable. In the middle of the field at a manageable distance, Joseph just plain missed.

Vikings WR K.J. Osborn sticks up for K Greg Joseph after loss: 'That kick didn't lose us the game'

Vikings WR K.J. Osborn is stick by his teammate, kicker Greg Joseph, after Joseph missed the game-winning kick at the end of regulation that would have put the Vikings over the Cardinals.

"I felt good about that kick. I know he missed the extra point earlier, but he’s been kicking good. We’re indoors, it’s a perfect surface. I’m thinking this should be an easy one here," Vikings coach Mike Zimmer said after the loss. "My thoughts on him are he’s just got to try to continue to be more consistent."

The Vikings return home 0-2, with three straight games at U.S. Bank Stadium against the Seattle Seahawks, Cleveland Browns and Detroit Lions, and the 2021 season coming to an early crossroads. For the second straight week, a winnable game slipped away from the Vikings. Last week, Dalvin Cook's fumble in overtime led to the game-winning kick for the Cincinnati Bengals. Sunday, Joseph missed in the most important moment of the game.

"We still had a chance to win. We’re probably two plays away from being 2-0. We’ll just keep grinding, keep fighting and we’ll just keep going from there," Zimmer said.

Cousins finished 22-of-32 passing for 244 yards and three touchdowns that went to Osborn, Justin Jefferson and Adam Thielen. Cook had 22 carries for 131 yards, hobbling through an apparent ankle injury in the second half. The Vikings put up 419 total yards, averaged seven yards per play and committed just three penalties after getting called for 12 last week.

Kyler Murray led the Cardinals with 400 yards passing, touchdowns to Rondale Moore, DeAndre Hopkins and A.J. Green, and a rushing touchdown, but also had two interceptions. Murray became the only player in NFL history to throw for at least three touchdowns and run for a score in the first two weeks of the season.

The Vikings' defense gave up some big plays, allowing 479 total yards 7.9 yards per play. But they also got three sacks from Danielle Hunter, Nick Vigil returned an interception 38 yards for a touchdown on the second play of the second half and they limited the Cardinals to 3-for-9 on third down conversions.

Murray answered every big play the Vikings made in the first half, hitting DeAndre Hopkins for a 15-yard touchdown, running for a 12-yard score of his own and finding a wide open Rondale Moore for a 77-yard score. The Cardinals led 24-23 at the half after Matt Prater drilled a kick from 62 yards out, which was shortly after Joseph made the first of a pair of 52-yard field goals.

Joseph missed his first extra point attempt of the game, also wide right, but had his chance for redemption and to send the Vikings back to Minnesota with their first win of the season. With the game on the line, Joseph couldn’t come through when it mattered the most.

So is Joseph still the kicker on Monday? The Vikings cut Daniel Carlson just two games into his rookie season after missing three field goals, two in overtime, in a 29-29 tie at Green Bay in 2018.

Despite an 0-2 start, Zimmer seemed more encouraged by his team than disappointed or panicked. The two losses have come by a combined four points.

"The heart that we played with today, the fight that we played with today. If we play like that, we’ll win a lot of games," Zimmer said. "They may all come down to like the last two have, but as long as we do that and keep fighting and keep trying to get better, keep working together and sticking together as a football team, then I think we’ve got a chance. That proved to me that we have a chance to be a really good football team."