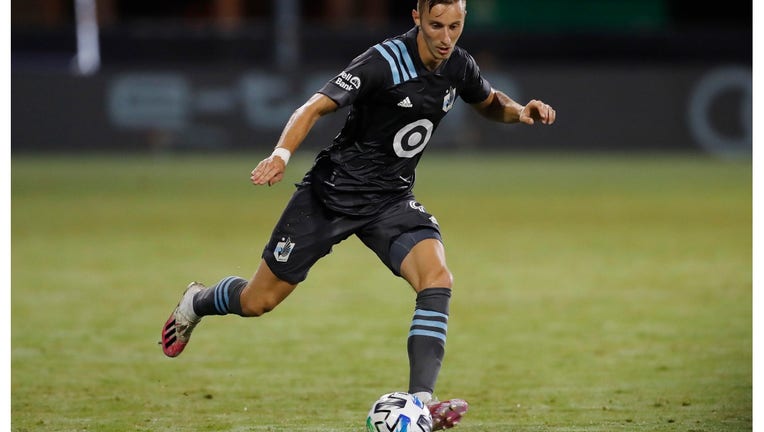 Jan Gregus #8 of Minnesota United runs with the ball against Real Salt Lake during a Group D match as part of the MLS Is Back Tournament at ESPN Wide World of Sports Complex on July 17, 2020 in Reunion, Florida. ((Photo by Michael Reaves/Getty Images))

MINNEAPOLIS - Minnesota United played Real Salt Lake to a 0-0 tie at the MLS is Back Tournament in a match that started late Friday night and ended Saturday morning in Florida.

While the result isn’t sexy, it puts the Loons in good shape to advance to the knockout stage of the tournament with one game remaining against a winless Colorado Rapids team. A 10:30 p.m. start in Florida is something Adrian Heath never would’ve expected in a Major League Soccer game, but they made the best of a tough situation with the Covid-19 pandemic.

Minnesota United and Real Salt Lake are now both 1-0-1 through two matches at the MLS is Back Tournament. The Loons are 3-0-1 to start the MLS regular season.

“It’s the first time I’ve started a game on a Friday and finished it on a Saturday, so that’s a new one,” Heath said. “Overall if you would have said to me after four games of the season, we’d have 10 points, we always work on two points a game, it’s been a good start.”

Minnesota United’s best chance of the first half came in stoppage time. Ozzie Alonso, who missed last Sunday’s game against Sporting KC with an injury, sent a pass to Aaron Schoenfeld. His shot went off the post, and Ethan Finlay’s rebound header was saved.

The Loons’ other main scoring chance came in the second half after a diving save from Tyler Miller on a Real Salt Lake shot. Minnesota United countered, and Robin Lod had a chance on a mini breakaway. His shot was stopped on a sprawling save by the Real Salt Lake keeper.

The two teams played to a scoreless draw, and Minnesota United is in good shape to advance to the knockout stage with one group stage game to play against Colorado Rapids.

“If somebody said to us that you’re going to have four points after two games, I think we would take it. Obviously we wanted a win tonight, but I think it was a fair draw to be honest,” midfielder Jan Gregus said. “Chances on both sides, kind of a 50-50 game but good position obviously with the last game to go in the group and hopefully winning for us, still very important.“

“We control our destiny so going forward, we know what we have to do when it comes to Wednesday in order to advance,” Miller said.

He’s right. A win or draw Wednesday, and the Loons control their own destiny for the knockout stage of the MLS is Back Tournament.