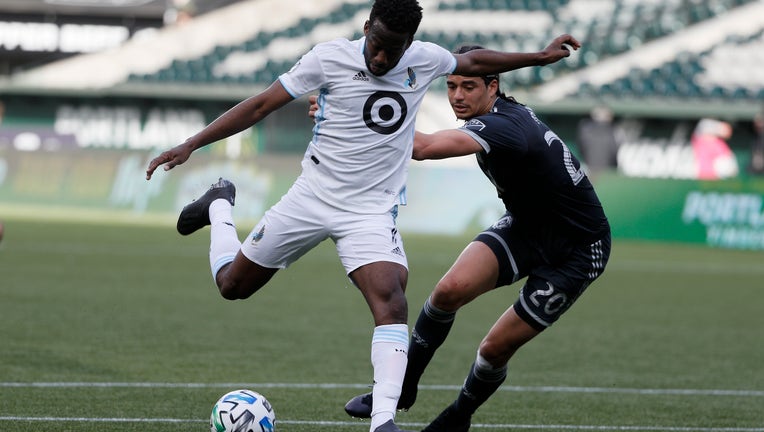 Kevin Molino # 7 of the Minnesota United FC takes a shot on goal against Jasser Khmiri # 20 of the Vancouver Whitecaps at Providence Park on February 22, 2020 in Portland, Oregon. (Soobum Im / Getty Images)

MINNEAPOLIS - Minnesota United held team training at the National Sports Center in Blaine on Thursday as it makes final preparations to head to Florida for the "MLS is Back Tournament."

Soon enough, soccer will be back. It’ll be in empty stadiums in Florida, but they’ll at least be playing.

“I think everybody just continued to get themselves prepared and ready mentally and physically for this. Every team is in the same boat, we’re all under new circumstances so we’re just trying to prepare ourselves physically and mentally for what’s to come in Florida,” Loons forward Mason Toye said Thursday at training.

Minnesota United learned its schedule for the MLS is Back Tournament earlier this week. MLS officials scheduled games early in the morning and at night, presumably, so teams aren’t playing in the Florida heat during the day.

The Loons must finish in the top two of their group, or be one of the top three third-place teams, to advance to the knockout stage. There will be a round of 16, quarterfinals, semifinals and the championship game will be played Aug. 11. The winning team gets a spot in the 2021 Scotiabank Concacaf Champions League.

Like any competitor would, Toye hopes Minnesota United is that team.

“Of course it’s to win at all costs and to bring home a championship. That’s my goal, that’s everybody’s goal. For me personally, it’s just to help the team any way. Hopefully that’s by scoring goals, being dangerous and just bringing energy,” Toye said.

Toye was humbled by the message the Loons sent during team training at Allianz Field last week. The team gathered around the midfield center circle, took a knee and raised their right fists in the air. Players were sporting “Black Lives Matter” shirts, and they posted a 20-second video to social media to share their message fighting racism and social injustice.

It was in response to the civil unrest in the Twin Cities after the officer-involved death of George Floyd. The incident sparked demonstrations and rights, and some were across the street from Allianz Field. Toye hopes his team’s show of solidarity is just the start of change.

“It was unbelievable for me, being a Black male on the team and just seeing us all come together as one for a common goal, a common cause, which is the Black Lives Matter movement. All of them just coming together and really getting behind the cause and being open to listen and to learn.” Toye said. “I’m really proud of all the guys on the team for what they’ve done so far and what they’re going to continue to do to help this movement get going.”