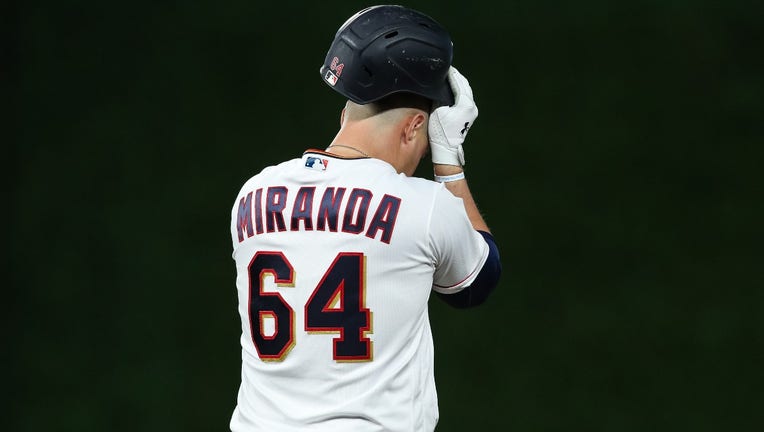 Jose Miranda #64 of the Minnesota Twins reacts to flying out against the Cleveland Guardians to end the game at Target Field on June 21, 2022 in Minneapolis, Minnesota. The Guardians defeated the Twins 6-5 in 11 innings.  ((Photo by David Berding/Getty Images))

MINNEAPOLIS - For the first time in 58 days, the Minnesota Twins no longer have the lead by themselves in the American League Central Division.

The Twins started a three-game series against the Cleveland Guardians in front of 22,341 fans Tuesday night at Target Field with a 6-5 loss in 11 innings, falling to 38-31 on the season. The Twins and Guardians are now tied atop the AL Central, and the two teams have seven more games against each other over the next nine days, including five games over four days next week in Cleveland.

The Twins had had the lead in the division since April 23. They're now 7-6 in their last 13 home games against Cleveland.

The Twins had a pair of chances in extra innings Tuesday night. With a runner at second to start the 10th, Byron Buxton walked to put two runners on with nobody out. But Carlos Correa, Max Kepler and Gary Sanchez all struck out. In the 11th, Jose Miranda sent a high fly to left that was caught at the wall to end the game. Another few feet, and it’s a two-run walk-off home run.

Luis Arraez gave the Twins a 5-3 lead in the seventh with a three-run homer to right. It was his fourth homer of the season, and he’s now batting .362 with 24 RBI on the season. Arraez is hitting .387 with three doubles, three homers, 12 RBI and a .441 on-base percentage in June, and has hit safely in 14 of his last 15 games at Target Field.

The Twins' seventh inning lead wouldn’t last. Franmil Reyes sent a two-out, two-run blast over the fence in center to tie the game 5-5 in the eighth off Emilio Pagan, who has now allowed 14 homers in his last 33 innings, dating back to last season.

"I don't think it was the wrong pitch. I just didn't execute it. I threw 17 pitches tonight. I threw 16 of them right where I wanted to. Life of the bullpen," Pagan said. "You make a mistake with a man on and it changes the game completely."

The Guardians got the game-winning hit in the 11th, as Andres Gimenez got an RBI single to center off Griffin Jax.

In his second start since coming back from the COVID-19 list, Joe Ryan recovered from a tough start and allowed three earned runs on seven hits over six innings. He struck out seven and walked one, throwing 70 strikes on 101 pitches. He allowed one run in the first inning before getting out of a jam, then gave up a two-run homer to Josh Naylor in the third as the Twins got down 3-0.

Alex Kirilloff added two hits, including a two-run double in the fourth that got the Twins within 3-2 in the fourth.

Buxton, Correa, Kepler and Gary Sanchez combined to go 2-for-18 with nine strikeouts in the loss. Twins’ hitters combined for 15 strikeouts Tuesday night. Aaron Civale, who entered the night with an earned run average over six, allowed two earned runs on five hits while striking out seven.

The Twins have now lost three of their last four, and for the first time in nearly two months, no longer have the solo lead in the division.

"The standings in June don’t really carry any significance for me. Those are things that we said when we were in first place. It doesn’t matter what place you’re in, as long as you’ve got a chance. We’ve got plenty of games to play, I think we’ve put ourselves in a good spot to go forward."