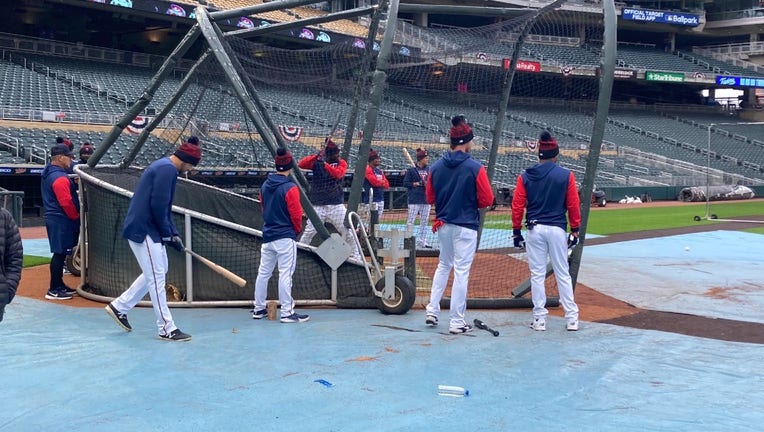 The Minnesota Twins held a workout on Wednesday at Target Field ahead of hosting the Seattle Mariners for Opening Day on Friday.

MINNEAPOLIS - The Minnesota Twins are saying all the right things ahead of 2022 Opening Day at Target Field. Now, it just has to translate to tangible production for a team that made changes in the offseason.

The Twins held a light workout on Wednesday at Target Field with batting practice, bullpens and infield work despite chilly and rainy conditions. Earlier in the morning, the Twins announced that Opening Day, set for Thursday, was being postponed to Friday against the Seattle Mariners. Playing outdoor baseball in April in Minnesota is always a gamble, and the forecast Thursday is for a high in the upper 30s with a chance for rain and/or snow.

Friday is expected to be in the low 40s, but should be dry. The team left Spring Training in Fort Myers, Fla., as confident as one can be with the stars hitting home runs.

The Twins struggled out of the gate in 2021, winning just 73 games and finishing last in the American League Central Division. The hope and the goal is to get back to the team that won division titles in Rocco Baldelli’s first two seasons as manager.

"The discussion and the talk and the feel of every guy in our clubhouse revolves around the right things. The No. 1 thing being winning baseball games and ultimately winning a World Series," Baldelli said Tuesday.

The Twins made a splash in the offseason, signing Carlos Correa to a three-year, $105 million contract. He hit 34 home runs last year, and is arguably the best shortstop in the game. He signed with Minnesota with the intentions of "bringing a championship culture" to the Twins. It’s an organization that has lost 18 straight playoff games, and hasn’t won a playoff series in 20 years.

While he’s the team’s highest-paid player, he insists he’s not the face of the franchise.

"This is not my team, this is Byron’s team," said Correa, referring to star center fielder Byron Buxton.

Buxton was the first and top priority for the Twins before Major League Baseball went into a lockout. The Twins signed him to a seven-year, $100 million contract. The Twins wanted a long-term commitment, want Buxton to prove he can stay healthy and he wanted to get paid.

Buxton said earlier this offseason he wants to "win a ring" in Minnesota. He thinks signing Correa, as well as starting pitchers Sonny Gray and Chris Archer, is a start.

"When I signed that was a big focus of what we wanted to do here was bring a championship team here. They brought in the pieces to do that, so the chemistry is there in the clubhouse," Buxton said. "It’s a lot of fun, and that fun translates to the field and when you do that, that leads to a lot more wins."

Fans willing to brave chilly conditions Friday will get their first look at the 2022 Minnesota Twins on Opening Day, a 3:10 p.m. first pitch against the Seattle Mariners at Target Field.