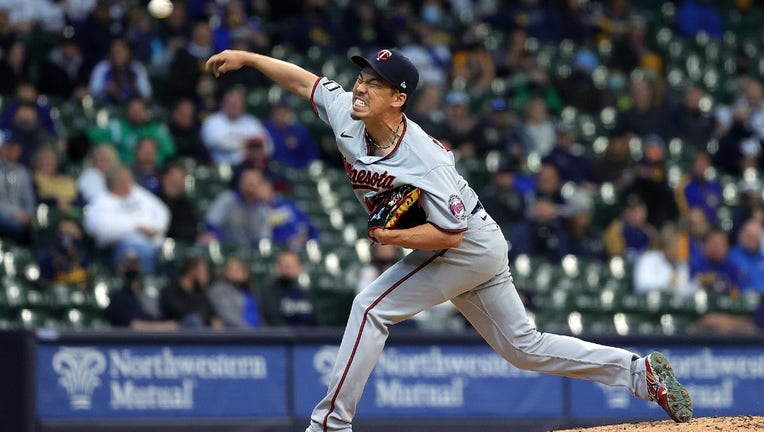 Kenta Maeda #18 of the Minnesota Twins throws a pitch during the second inning against the Milwaukee Brewers on Opening Day at American Family Field on April 01, 2021 in Milwaukee, Wisconsin. ((Photo by Stacy Revere/Getty Images))

MINNEAPOLIS - The Minnesota Twins are off to a 0-1 start after blowing a three-run ninth inning lead in a 6-5 loss in 10 innings to the Milwaukee Brewers on Opening Day at American Family Field.

It also came with a cost, as third baseman Josh Donaldson left the game after just a half inning due to injury. Donaldson doubled in the top of the first, and suffered an apparent leg injury rounding first base. TV analyst Justin Morneau said on the broadcast he suffered a hamstring injury, not a calf injury, which Donaldson battled most of last season.

"It doesn’t appear to be related to JD’s calf in any way. It looks like it’s isolated to his hamstring area," Twins manager Rocco Baldelli said after the loss.

Donaldson will be re-evaluated on Friday, an off day for both teams.

Leading 5-2 in the bottom of the ninth, the Brewers rallied for three runs off Alex Colome to tie the game 5-5 and force extra innings. It started when Colome threw high to second base on what should’ve been the second out of the inning. The error allowed a run to score after Max Kepler dropped a line drive in right field. Travis Shaw then tied the game 5-5 with a two-out double to right center.

The Brewers got the walk-off win in the 10th. Lorenzo Cain scored from third, beating the throw home on Orlando Arcia's ground ball past Randy Dobnak.

"A combination of things that happened that obviously didn't go our way, and we didn't make the plays that we needed to. We just have to ultimately make those plays and throw the ball to the right base, things like that," said Baldelli, who suffered his first Opening Day loss with the Twins in his third season. "We start that inning and the same balls are hit, I think we're going to make those plays a vast majority of the time, and know what to do. Today, it just didn't happen."

Jake Cave, who came into play outfield with Luis Arraez replacing Donaldson at third, scored the Twins’ first run of the season on a wild pitch in the third inning. They led 2-0 after Cave scored on Kepler’s two-out single.

Arraez added a two-out, run-scoring single in the fourth to give the Twins a 3-1 lead. Byron Buxton crushed a two-run homer, a blast off the scoreboard in left center, in the seventh to give the Twins a 5-2 lead. Buxton’s homer came off a hanging curve, and the 456-foot blast is the longest of his career.

Kepler finished with three hits and had a chance for a cycle in the eighth before flying out to left field.

In his first Opening Day start, Kenta Maeda went 4 1/3 innings, allowing two runs, one earned, on six hits while striking out five and walking two. He finished with 88 pitches, 57 for strikes. Maeda labored through a few long stretches, including throwing 36 pitches in the third inning. The lone run of that inning for Milwaukee came on a bases loaded walk.

The Twins had Andrelton Simmons on second to start the top of the 10th, but Josh Hader struck out Willians Astudillo, Arraez and Cave.

The Twins and Brewers are off Friday before resuming the three-game series on Saturday.