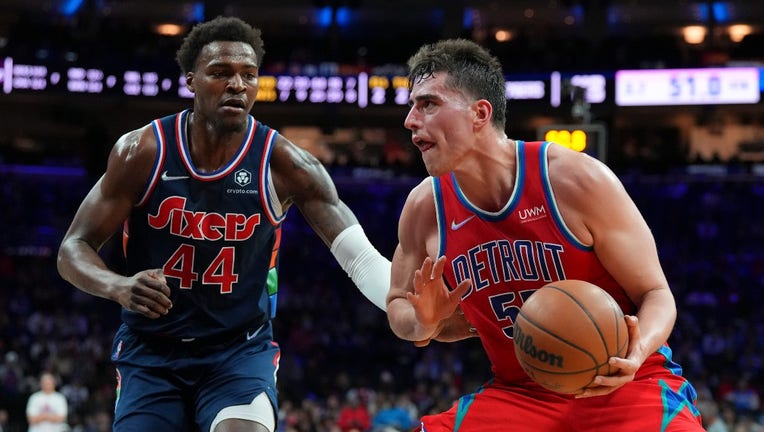 Luka Garza #55 of the Detroit Pistons controls the ball against Paul Reed #44 of the Philadelphia 76ers at the Wells Fargo Center on April 10, 2022 in Philadelphia, Pennsylvania. The 76ers defeated the Pistons 118-106. ((Photo by Mitchell Leff/Getty Images))

MINNEAPOLIS - The Minnesota Timberwolves announced two signings Tuesday morning, and at least one of them should be a familiar name to local fans who follow the Big Ten.

Garza is a 6-11 forward who scored from everywhere on the floor over four seasons at the University of Iowa. He left the Hawkeyes as their all-time leading scorer with 2,306 career points, which is seventh in the history of the Big Ten. He was the unanimous National Player of the Year for the 2020-21 season after averaging 24.1 points, 8.7 rebounds, 1.7 assists and 1.6 blocks per game in more than 31 minutes a game over 31 games.

The Minnesota Timberwolves All-Star Karl-Anthony Towns officially announced the signing of a new contract that will keep him in Minnesota another four years beyond his current deal. FOX 9’s Pierre Noujaim has the latest from the press conference.

Garza was a First-Team All-America pick, and two-time Big Ten Player of the Year.

He was taken in the second round, at No. 52 overall, by the Detroit Pistons in the 2021 NBA Draft. In his first season, he averaged 5.8 points and shot 44.9 percent from the field, while also grabbing 3.1 rebounds per game, in 32 games and five starts for the Pistons. He also made 16 starts for the Piston’s G League team, the Motor City Cruise, and averaged 20.6 points and 9.5 rebounds per game.