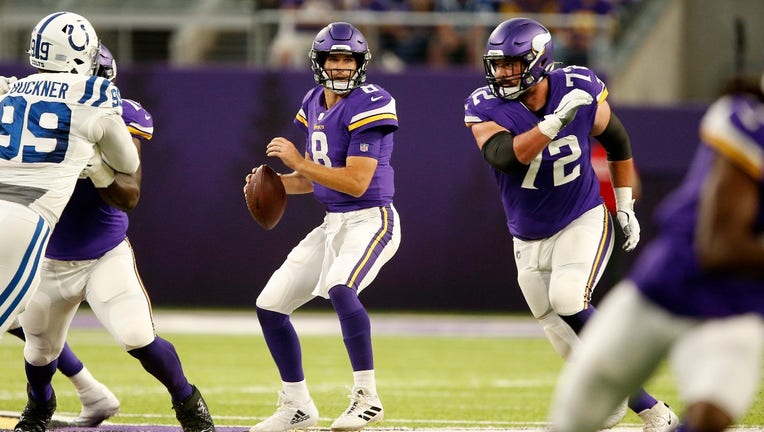 Minnesota Vikings quarterback Kirk Cousins (8) looks down field from the pocket during a preseason game between the Indianapolis Colts and Minnesota Vikings on August 21, 2021 at U.S. Bank Stadium in Minneapolis, MN. ((Photo by Jeffrey Brown/Icon Sportswire via Getty Images))

MINNEAPOLIS - The Minnesota Vikings will finish their preseason schedule at the Kansas City Chiefs Friday night, and coach Mike Zimmer said Wednesday the lineup will look similar to last Saturday’s game against the Indianapolis Colts.

In other words, a majority of starters will see at least some time in their final chance for game reps before the Week 1 opener at Cincinnati. Zimmer said Adam Thielen will not play. It’s unlikely that Dalvin Cook or Justin Jefferson will play after not seeing the field against the Colts, and others like Danielle Hunter, Harrison Smith and Patrick Peterson are unlikely to play.

It's a change from the past, when the last preseason game is exclusively for reserve players battling for final roster spots. The Vikings have until next Tuesday to trim the roster to 53.

The Vikings held a 90-minute walk-through on Wednesday after scrimmaging for a full half on Tuesday. Zimmer said the scrimmage served two purposes: He wanted to see what kind of shape the team was in when it came to a live game, calling plays, going to and from the huddle and sidelines and working on situations. He also wanted an environment more controlled than a preseason game, where there’s not tackling and a reduced risk of getting hurt.

"We’ll probably do it again next week, just to get another game-like situation. I may do it a little bit longer next time," Zimmer said.

VIKINGS NEED TO WORK ON COMMUNICATION IN ROAD VENUE

Friday’s preseason game at Kansas City provides an opportunity the Vikings haven’t had yet: Playing on the road in a hostile environment. It’s something the offense will have to re-learn after most venues either didn’t have fans or had very limited fans in 2020.

It’s especially important with the first two regular season games being on the road, at Cincinnati and at Arizona.

"It’ll be good to get on the road with a loud crowd. I think it’s good for our team to have that feeling before we go to Cincinnati or Arizona," Zimmer said.

"I think it’s very important, especially with Kansas City having a great fan base. They’re going to be loud and it’s going to be a lot of energy in the stadium, so it’s something we haven’t faced this year," tight end Irv Smith Jr. said.

The Vikings’ offense in the preseason remains a work in progress. The first team has had three series in two games, 15 total snaps and hasn’t scored a touchdown. That’s also without Justin Jefferson and Dalvin Cook.

Cousins was reminded of Jefferson’s skill in Tuesday’s scrimmage, connecting with him on a pair of touchdowns. The two are getting more time together after Jefferson was out with a shoulder injury.

"I said to him yesterday after the scrimmage ‘You know you’re a pretty good football player and I realized it when you’ve come back after being gone.’ Absence makes the heart grow fonder and when you show up and you kept catching the ball and kept making plays, it’s like this guy is pretty good," Cousins said.

Cousins was just 5-of-7 for 35 yards against the Colts after not playing against the Broncos. The Vikings’ points in the preseason have come on a Troy Dye interception returned for a touchdown, and three Greg Joseph field goals.

Friday is Cousins’ final chance, an appearance that will likely be brief, to get the offense rolling before it gets real on Sept. 12.

"Obviously got to go out Friday night and play at a high level. Hopefully be able to finish this slate of preseason games, walk away with a good feeling about what we do," Cousins said. "That’s out there for us to go get and go earn."

You can watch Friday’s final preseason game on Fox 9.