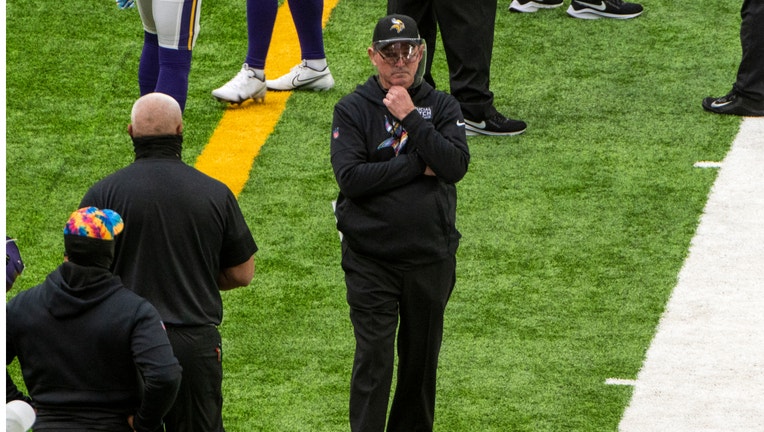 Head coach Mike Zimmer of the Minnesota Vikings walks along the sideline in the second quarter of the game against the Atlanta Falcons at U.S. Bank Stadium on October 18, 2020 in Minneapolis, Minnesota. ((Photo by Stephen Maturen/Getty Images))

MINNEAPOLIS - Minnesota Vikings coach Mike Zimmer remained at a loss for an explanation Monday, 24 hours after a 40-23 loss to the previously winless Atlanta Falcons.

Atlanta came to Minneapolis after firing coach Dan Quinn and General Manager Thomas Dimitroff. The players went out like they had something to prove, dominating the Vikings in all three phases in the first half.

It was an inexplicably slow start for the Vikings, a week after coming a half yard from handing the Seattle Seahawks what would’ve been their first loss of the season. Sometimes it can’t be explained.

“If we lost a game by one point and we had a letdown in the next game, that would be surprising to me. If you lose a game, you shouldn’t have a letdown. You should put your foot on the grinder and get back to work,” Zimmer said Monday.

Instead, Kirk Cousins threw three first half interceptions, including on the first play of the game. They led directly to 17 Atlanta points. The Falcons had a 20-0 lead at the half as the Vikings had the ball for only 9:31, managed six first downs and had 127 total yards.

By the time the Vikings started scoring in the second half, it was too late. The damage had been done.

So how much weight does Zimmer put on himself for the loss, and the team’s 1-5 start?

“One hundred percent,” he said.

Zimmer pointed to a lot of areas that need to be cleaned up before the Vikings hit the road to face the Green Bay Packers. There were the turnovers, then the Falcons converted a touchdown to Julio Jones on a 3rd and 11. The Vikings, down 10-0, had a 1st and goal at the 2 and came away with no points. A chance to swing the momentum in the game, and they came away with nothing to show for it.

The Vikings ran 24 plays in the first half. The Falcons ran 80 offensive plays for the game, exposing a defense with young cornerbacks and without Anthony Barr, Danielle Hunter, Kris Boyd, Holton Hill and losing Mike Hughes during the game to a neck injury.

The real gut punch came in the third quarter. Ryan hit Jones on a 4th and 3 for a 40-yard touchdown down the sideline after Jeff Gladney fell down in coverage. Ryan finished 30-of-40 for 371 yards, four touchdowns and no turnovers. The Vikings have allowed at least 350 total yards in all but one game, and have allowed a 300-yard passer twice.

The Vikings enter their bye week, and players have four days off. But it’s not a normal week off where players scatter and go on vacations. Due to the COVID-19 pandemic, they have to stay in town and get tested daily.

As Zimmer said, “there’s a lot of work to do and a lot of things to clean up” as they stare at a 1-5 start and head to face a division rival on the road.