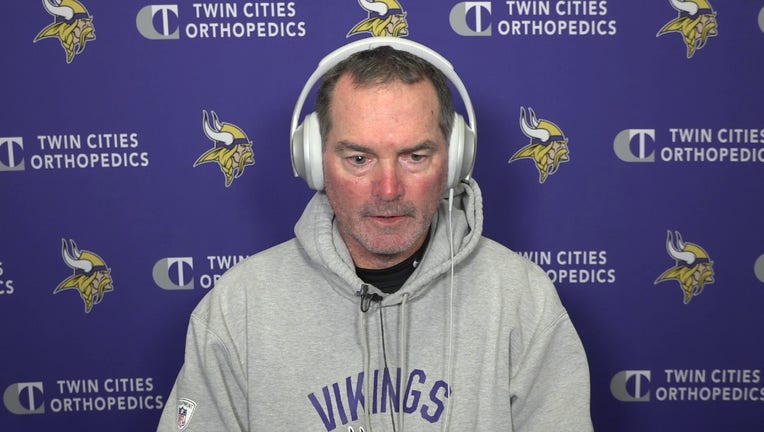 Mike Zimmer spoke Wednesday about facing the Seahawks, managing Dalvin Cook's workload and the importance of abiding by COVID-19 guidelines.

MINNEAPOLIS - Times might be getting a little tense at TCO Performance Center as the Minnesota Vikings are battling for a playoff spot with three regular season games left.

Mike Zimmer spoke with reporters Wednesday, as they prepare to host the Chicago Bears on Sunday, for about half his normal time before taking off his headphones and walking away. The Vikings likely have to win their three remaining games against the Bears, at the Saints and at the Lions to secure a playoff spot.

He especially didn’t want to talk about the team’s kicking situation, though it appears they’ll be sticking with Dan Bailey. The Vikings released No. 2 kicker Tristan Vizcaino on Tuesday, and to this point, haven’t signed any new kickers.

So will they stick with Bailey? Are the Vikings planning to add other kickers?

Is he frustrated that the offense can move the ball, but the kicker has struggled?

“I don’t think that we have a kicker that we can’t depend on. There’s all kinds of guys that make mistakes throughout the course of a game. That’s just part of life,” Zimmer said.

Just as concerning as the kicker might be the status of linebacker Eric Kendricks, who didn’t practice all last week and missed his second straight game due to a calf injury. Kendricks still leads the Vikings’ defense with 107 tackles, calls the defensive plays and is the defensive leader.

Could he be back Sunday?

Zimmer has led the Vikings to three playoff appearances and two NFC North titles in six seasons, but if they come up short in 2020, it’ll lead to offseason heat.

The Vikings held practice Wednesday indoors at TCO Performance Center, and according to the team's pooll report, Eric Kendricks, Kyle Rudolph and Alexander Mattison did not participate. Kendricks is still dealing with a calf issue, while Rudolph had his start streak snapped at 93 games last Sunday with a toe injury. Mattison, the No. 2 running back to Dalvin Cook, is still recovering from having appendix surgery.

Armon Watts and C.J. Ham also did not practice Wednesday. Kendricks went through team stretching before leaving. Rudolph and Mattison did stretching, and stayed for light jogging.