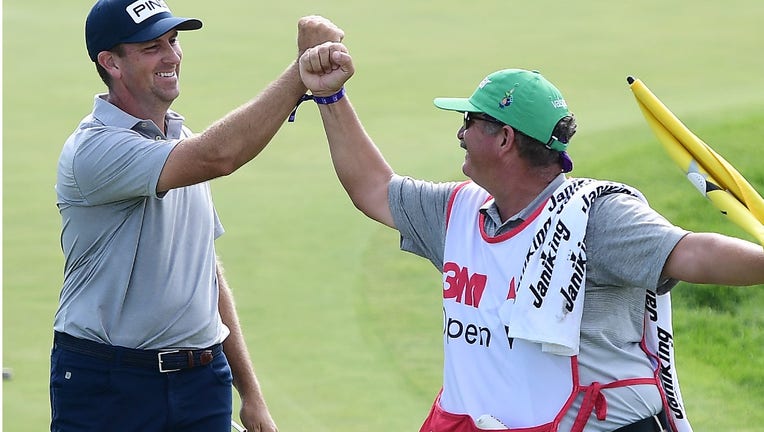 Michael Thompson of the United States celebrates with his caddie, Damian Lopez, on the 18th green after winning the 3M Open on July 26, 2020 at TPC Twin Cities in Blaine, Minnesota. ((Photo by Stacy Revere/Getty Images))

MINNEAPOLIS - Michael Thompson’s birdie on the 72nd hole at the 3M Open on Sunday wasn’t all that flashy, but it made him quite a bit of money and earned the 35-year-old some long-term job security.

Thompson shot a 4-under par 67 on Sunday at TPC Twin Cities, including birdies at the 16th and 18th, to win the second-annual 3M Open in Blaine by two shots. Thompson shot 12-under par through 36 holes, had the lead going into Sunday and took the win with as many as 16 players within five shots of the lead throughout the day.

With the win, Thompson wins more than $1 million and is now exempt on the PGA Tour through the 2022 season. He’s eligible for the three major tournaments this year, and qualified for the World Golf Championships-Fed Ex St. Jude Classic next week in Memphis.

He became emotional on live TV talking about the win.

He admitted to battling some nerves before hitting the first tee on Sunday. The playing times were moved up, and groups were in threes with storms expected during the day.

“I basically told myself ‘Hey man, you got this. Just go play.’ I felt like I did that really well. I played really smart golf. It’s just awesome that I was able to do that and create these new memories that I can rely on in the future,” Thompson said.

He became emotional after the win, knowing his family wasn’t there to celebrate with him. It’s just his second win on the PGA Tour, and first since the 2013 Honda Classic. Due to the Covid-19 pandemic, families of the players were not allowed on the grounds.

Thompson and his wife recently added to their family, adopting a child.

“It means the world. I can’t wait to give my son the biggest hug, to celebrate with him, go get cupcakes or something. To hug and cry with my wife, she’s been such a huge support for me. She’s never stopped believing in me and what I can do, and I’m so thankful,” Thompson said.

Sunday marked his first win in 167 starts, and with it, he goes from 151st to 39th in the Fed Ex Cup Playoff standings.

Defending champion Matthew Wolff was one of many trying to hunt Thompson down. Wolff shot a final round 67 to finish 14-under par, five shots behind.