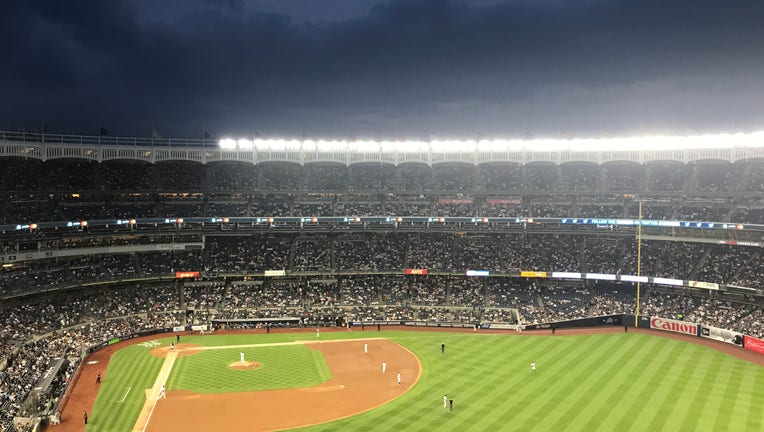 NEW YORK (AP) - A work stoppage at the start of spring training 2022 seems increasingly likely after baseball players refused to negotiate with owners over a one-month delay for this spring training and regular season.

The breakdown Monday came after the sides were unable to reach a deal last June over the start of the coronavirus pandemic-shortened 2021 season, although they did work out an opening-day agreement for expanded 2020 playoffs.

With the collective bargaining agreement set to expire Dec. 1, it is not hard to envision management instituting a lockout for baseball's first work stoppage since the 7 1/2-month strike that wiped out the 1994 World Series.

"I hope we don't have a work stoppage. I hope we are able to play," All-Star third baseman Nolan Arenado said Tuesday during his introductory news conference following his trade to St. Louis from Colorado. "I think both sides want to play, and especially with this 2020 season and it got delayed and all the things that are going on in the country, it probably wouldn't be very good if we had a stoppage."

Whatever ability to work together that developed after the last stoppage has dissipated, largely because union head Tony Clark, his staff and players believe economics have tilted toward owners and clubs during the labor contracts agreed to in 2011 and 2016.

Those agreements saw luxury tax rates increase and restraints imposed on signing bonuses for amateurs, while among the objectives players gained included increases in minimum salaries, earlier offseason deadlines, a decease in team compensation for the loss of free agents and clubs assuming the cost of clubhouse food spreads.

Players have seethed in recent years over the way teams have delayed callups of rookie stars to delay eligibility for free agency and sometimes salary arbitration, while teams say it is their right to determine when players are ready for the major leagues.

Baseball Commissioner Rob Manfred claims teams combined to lose $2.7 billion to $3 billion during the pandemic. Payrolls even before last year's regular-season without fans stayed in a historic narrow range of $4.24 billion in 2017, $4.23 billion in 2018 and $4.22 billion in 2019, then dropped to $1.75 billion last year, when players received 37% of salaries due to the 60-game schedule.

Players view club large-scale rebuilding as tanking. Both sides are troubled by regular-season attendance that dropped from 73.76 million in 2016 to 68.49 million in 2019.

Scott Boras, who negotiated more than $1.2 billion in contracts during the 2019-20 offseason, says the losses will contribute toward an agreement next offseason. Boras is the sport's most influential agent, with clients Zack Britton, Gerrit Cole, James Paxton and Max Scherzer filling four of the eight seats on the union's executive subcommittee, which also includes Jason Castro, Francisco Lindor, Andrew Miller and Marcus Semien.

"We've had an interruption in our sport which was unforeseen and lengthy and when you look back at our bargaining history, there's not been an interruption of that length in modern time," Boras said. "And for those reasons, I think the clarity of each side's advances is something that is going to be measured within the framework of the recent influence of the pandemic on baseball."

Manfred declined to comment. Clark said in an email he was not more worried about a work stoppage because of the current state of relations and that player anger at club behavior did not frame the relationship.

"In every discussion we have, we are focused on reaching a fair and equitable deal," he wrote.

Even before the pandemic, the players' association increased U.S, Treasury securities and investments to $134.95 million as Dec. 31, 2019, up from $83.62 million a year earlier, according to a federal filing, largely a retention of member revenue typical in the leadup to collective bargaining.

Publicly, baseball players and owners say they have to work together.

"It's incumbent upon both parties to reach a mutually beneficial agreement, and I know both parties will make every effort to do that," Cardinals CEO Bill DeWitt Jr. said. "I don't want to get too deep into vetting too the issues and all the things that are important to both sides. Historically MLB and the players' association have avoided work stoppages for a long, long time, longer than any other professional sport. So let's hope that that continues through next year."

Speaking on KFNS radio last June 9 during bitter negotiations between MLB and the union, DeWitt made a comment that revealed the wariness.

"They have by far, by far the best deal of any players in any sport," he said of the cap-free system, "and that's why you see the other sports coming back pretty quickly because they're aligned with the players. They've got — the more revenue, the more the players get based on a formula. We don't have that in baseball."

"The players have always fought for whatever they can get in individual negotiations, and it's been to their benefit. The industry isn't very profitable, to be quite honest, and I think they understand that. But they think the owners are hiding profits, this and that, and there's been a little bit of a distrust there," he said.