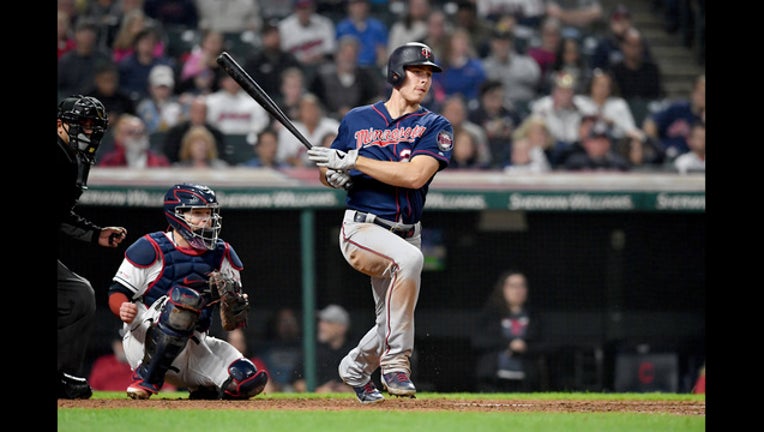 Max Kepler #26 of the Minnesota Twins hits a single during the ninth inning against the Cleveland Indians at Progressive Field on June 06, 2019 in Cleveland, Ohio. (Photo by Jason Miller/Getty Images)

MINNEAPOLIS (FOX 9) - Max Kepler had a huge night as the Minnesota Twins finished their series at Cleveland with a 5-4 victory Thursday night at Progressive Field.

Kepler hit three home runs as the Twins increased their lead over the Indians to 10.5 games in the American League Central Division. He finished the night with four hits, a walk, four RBI and scored three runs.

The win also avoided a three-game losing streak, which the Twins have yet to do this season.

He had a chance to become just the 19th player and Major League Baseball history to hit four home runs in one game. He hit third in the top of the ninth, but settled for an infield hit.

Kepler led off the night with a solo homer to right on the second pitch of the game to give the Twins the early 1-0 lead. It went an estimated 369 feet. His second homer of the night came in the top of the third, a two-run blast inside the foul pole in right, giving the Twins a 3-0 lead.

Kepler’s third homer of the night came in the top of the seventh, a 406-foot solo shot to right center. It gave the Twins a 5-1 lead. Kepler now has 15 homers on the season, and entered the night looking to end an 0-for-21 skid after being named the American League Player of the Week in late May.