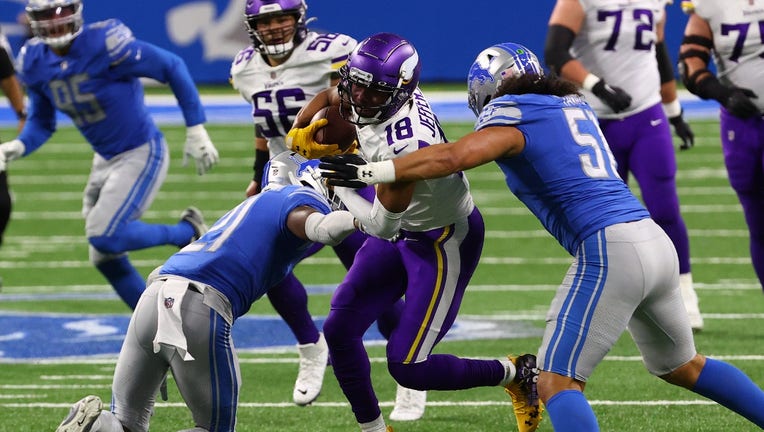 Justin Jefferson #18 of the Minnesota Vikings is tackled by Tracy Walker #21 of the Detroit Lions after making a reception during the first half at Ford Field on January 3, 2021 in Detroit, Michigan. ((Photo by Rey Del Rio/Getty Images))

MINNEAPOLIS - Justin Jefferson entered the Minnesota Vikings’ history books yet again Sunday, passing Randy Moss for the franchise record in receiving yards by a rookie in the team's 37-35 win over the Lions to finish the 2020 season 7-9.

Jefferson made a 37-yard catch in the third quarter, putting him at five catches for 83 yards on the day. He entered Sunday needing 47 yards to pass Moss, and did it on that catch.

Jefferson is well aware of where he stands among top Vikings’ receivers. He’s sporting cleats Sunday that pay tribute to Moss’s rookie season. In addition to 69 catches, he had 1,313 yards and 17 touchdowns.

"It’s an honor to break Randy Moss’s record. Him being a hall-of-famer and him just being so dominant in this league, to break his record is truly a blessing. It’s truly crazy to be in this position. The cleats, I had to honor him. I had a good chance to break the record today so I had to put him on the cleats. I’ve got to get him to sign them so I can put them in my trophy case," Jefferson said after Sunday's win.

"What if I would’ve had those two games starting and been having the same targets that I’ve had this whole year? Who knows what I would’ve did with that," Jefferson said.

"He did a great job this year of being ready when his number was called, and just continuing to show up for us. It’s also impressive to look back and realize that the role he had for us Week 1 and Week 2 was not the same role he had Week 3 and beyond, so that’s encouraging as well to think what we could’ve done with two more weeks as the X. His future is bright," quarterback Kirk Cousins said.

Late in the third quarter, Jefferson made his seventh catch of the day. It put him at 112 yards, breaking the NFL's record for receiving yards by a rookie in the Super Bowl era. He passed Anquan Boldin, who had 1,377 in 2003. He's the favorite to win the NFC Offensive Rookie of the Year.

"Jefferson is a good player. I love the way he competes, he catches everything. He continually gets better and better. He’s a great weapon to have and should be for many, many years," Vikings coach Mike Zimmer said after Sunday's win.

"I just released the beast. I just went out there and just played my ball. Just was true to the process and just let my game play for itself," Jefferson said.

The Vikings chose Jefferson with the No. 22 overall pick in the 2020 NFL Draft, a choice they got after trading Stefon Diggs to the Buffalo Bills in the offseason.