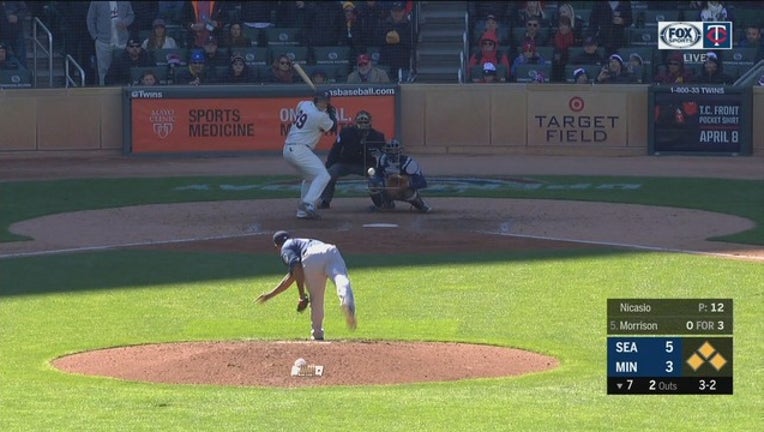 MINNEAPOLIS (AP) - Playing in a Twins-record low of 27 degrees, the Seattle Mariners eventually heated up at the plate as Kyle Seager and Guillermo Heredia homered Saturday in an 11-4 win over Minnesota.

The first-pitch temperature at Target Field beat the Minnesota mark of 31 degrees for a game in 2014. Coors Field in Denver holds the major league low with a 23-degree day in April 2013 when Atlanta visited the Rockies.

Seattle didn't manage a hit against Twins starter Jose Berrios (1-1) through three innings. Robinson Cano hit an RBI single in the fourth and Seager connected for a 3-0 lead.

The Mariners added two more runs in the fifth off Berrios when Dee Gordon rolled a two-run single through a drawn-in infield to make it 5-0. Berrios was pulled from the game after 4 2/3 innings - his shaky start came one outing after he tossed a shutout in his season debut at Baltimore.

Minnesota chipped away with a three-run sixth inning. Joe Mauer and Miguel Sano led off with back-to-back doubles, and Eddie Rosario and Eduardo Escobar followed with RBI singles.

The Twins threatened in the seventh by loading the bases with one out but couldn't push across another run against Seattle's bullpen.

The Mariners added insurance during a five-run eighth inning, including a three-run double by Healy and a two-run homer by Heredia.

Mariners: C Mike Zunino (right oblique strain) could join the team when the Mariners return to Seattle next week after their current road trip, manager Scott Servais said. He was eligible to return from the disabled list on Saturday.

Twins: RHP Phil Hughes (strained left oblique) threw a side session after pitching five innings in a rehab assignment Thursday in Fort Myers, Florida. Manager Paul Molitor said the team will continue to monitor Hughes on a day-to-day basis. . RHP Ervin Santana (finger) will fly back to Minneapolis on Tuesday to be examined by team doctors.

Mariners: LHP Marco Gonzales (1-0, 4.26 ERA) makes his second start of the year after earning a win in 6 1/3 innings against San Francisco.

Twins: RHP Lance Lynn (0-1, 11.25) is looking to bounce back from his first start with the Twins, a loss against Pittsburgh.