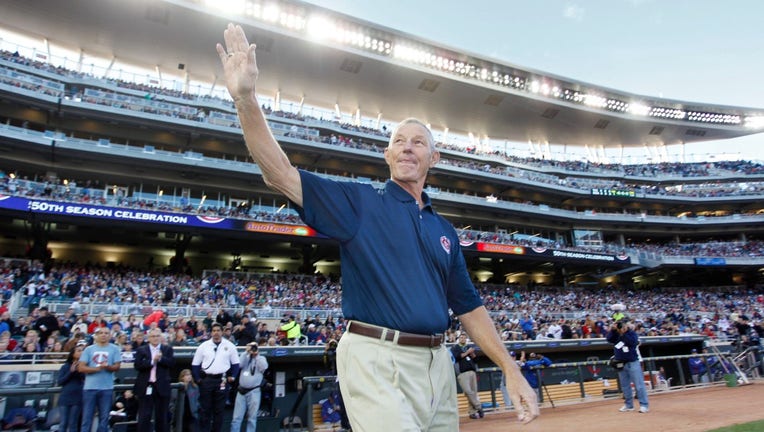 Former pitcher Jim Kaat for the Minnesota Twins acknowledges the crowd as he is announced as one of the top 50 players from the Twins 50 years as a team prior to the game against the Texas Rangers on September 3, 2010 at Target Field in Minneapolis, ((Photo by Bruce Kluckhohn/Getty Images))

MINNEAPOLIS - The Minnesota Twins recently held a Zoom meeting with Jim Kaat, presumably to discuss plans as he’s inducted to the National Baseball Hall of Fame later this year.

Little did Kaat know he was in for a surprise, with other Twins’ Hall-of-Famers joining him on the call. Kaat learned the Twins are retiring his No. 36 jersey on July 16 at Target Field. He’ll become the 10th player to have his jersey retired, joining the likes of Joe Mauer, Harmon Killebrew, Tony Oliva, Bert Blyleven, Tom Kelly, Kirby Puckett and Kent Hrbek.

"It’ll be a great honor to join the numbers that are up there for sure," Kaat said.

The Twins also have Jackie Robinson’s No. 42 hanging, as the number was retired across Major League Baseball in 1997. Kaat and Oliva were elected to the Hall of Fame last month, and will be inducted at a ceremony in Cooperstown on July 24.

Mauer, Oliva, Carew, Blyleven, Hrbek and Kelly, the six Twins still alive with their jersey retired, all offered congratulations to Kaat on the call.

"Congratulations on your No. 36 being retired," Blyleven said.

"My heart still pumps when I walk into that stadium and see my number hanging on the wall," Hrbek said. "You’re going to get that same feeling when you walk into Target Field and see 36 hanging up there."

"So happy and so deserving," Kelly said.

Kaat, 83, started as a full-time major league player in 1961, also the Twins inaugural season in Minnesota. He had 189 wins, has the Twins’ record for starts at 422, and innings pitched at 2,862. He’s also the all-time winningest pitcher at Metropolitan Stadium with 91 victories.

He pitched for 25 seasons with the Twins, White Sox, Phillies, Yankees and Cardinals, and had 283 career wins with a 3.45 earned run average, more than 2,400 strikeouts and 180 complete games in 625 starts. He had 31 career shutouts, and was a three-time All-Star.