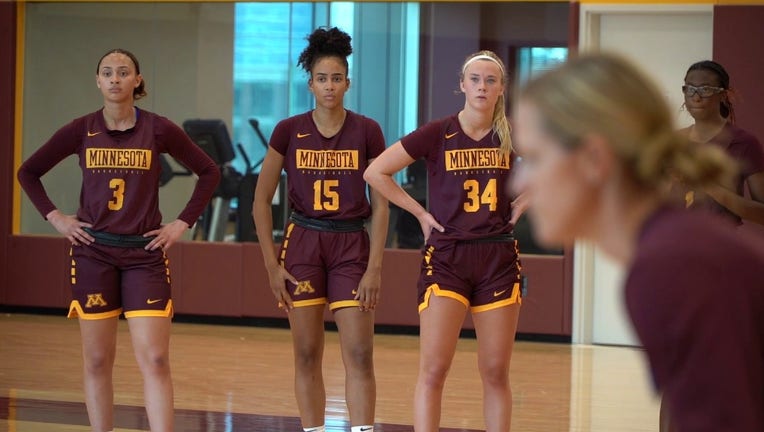 MINNEAPOLIS - There was optimism in the air and plenty of energy in the building as the University of Minnesota women’s basketball team gathered Monday at Athletes Village for its first practice of the 2022-23 season.

There were a lot of new faces, too. Nine of them to be exact, between five transfers and the best freshmen class in the history of the program, which also happens to be ranked in the top-10 in the nation. Lindsay Whalen is entering her fifth season with the program.

"I think everybody is so excited Day 1. People are coming in and there’s already expectations, a lot put on their shoulders. There’s no question they’re extremely talented, but it’s a team," Whalen said after Monday’s practice. "That’s my job is to keep a monitor on that and it’s a game, it’s fun. It’s supposed to be."

Eight of the 12 players on the roster are Minnesota natives, something Whalen made a priority when she was hired in 2018. She’s also faced some adversity with departures. A few years ago, it was Destiny Pitts. This past season, sharp-shooter Sara Scalia left the program, as did Jasmine Powell and Kadi Sissoko. There are just three players back from last year's team.

Whalen and the Gophers signed Burnsville native Destinee Oberg and Angelina Hammond out of the transfer portal. But all the talk entering the season surrounds the four-player freshman class that's not only the best in Whalen’s tenure, but in program history and one of the best in the country.

Mallory Heyer (Chaska), Nia Holloway (Eden Prairie), Mara Braun (Wayzata) and Amaya Battle (Hopkins) make up Minnesota’s freshmen class. All four are top-100 recruits, and Braun comes in as the highest-rated at No. 28 in the country, and the No. 8-ranked point guard.

"I know they have huge goals and big dreams, and it’s my job and our coaching staff’s job to help them with that. There’s definitely a spark in everybody, not just the four of this class. It’s an exciting time," Whalen said.

So what do they expect of themselves?

"I expect our class to be the class that kind of gets good players from Minnesota to stay home and be a part of the class that really changed the Minnesota Gopher women’s basketball culture," said Battle, whose brother, Jamison, transferred back to Minnesota last year to play for Ben Johnson and the Gophers men's team.

Minnesota has yet to make an NCAA Tournament under Whalen, making the WNIT in her first season.

"Absolutely, we’re here to win. Like I told our team, my team here when I played, the Lynx, that’s ultimately what I want. Great people, work hard, we’re leaders and disciplined. Gotta do that every day," Whalen said. "The times I’ve been around, we’ve done those things well and we’ve had talent, we won. There’s no question there’s a lot of motivation to win, that’s why Mark (Coyle) and Julie hired me. We want to win, there’s no question, and we will. I know it hasn’t been perfect, but we live and we learn."

Lindsay Whalen is plenty busy as the Gophers start summer workouts, but she’s also getting ready for a big weekend in September. In her first time on the ballot, Whalen was selected to the Naismith Basketball Hall of Fame.

She’ll be inducted on Sept. 10. Whalen led Minnesota to its only Final Four appearance in 2004. She won four WNBA titles with the Minnesota Lynx, and has two Olympic gold medals. Her No. 13 jersey hangs in the rafters at both Williams Arena and Target Center.

"I’ve been working on my guest list, and I guess my speech, I’ve got to figure that out. I’m going to try to limit it to like 400 people I’m going to thank in my five minutes," Whalen said. "It’s going to be a fun weekend, that’s for sure."