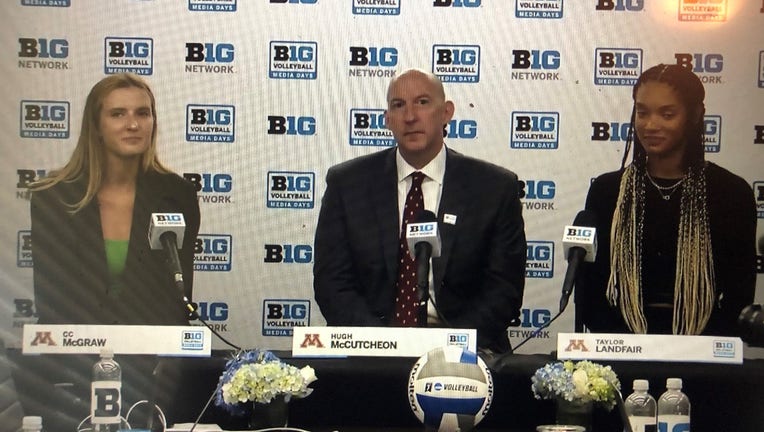 MINNEAPOLIS - Hugh McCutcheon has never shied away from going up against the top college programs in the country before the University of Minnesota volleyball team starts the Big Ten season.

McCutcheon is entering his 11th season with the Gophers, and that approach isn’t changing any time soon. McCutcheon, as well as senior libero CC McGraw and sophomore outside hitter Taylor Landfair, were all at Big Ten Network studios on Chicago on Tuesday for the league’s media day.

The Gophers will have eight matches in the 2022 non-conference season, and six of the opponents finished last year ranked in the top-25. Minnesota is one of seven ranked Big Ten teams ranked, with Wisconsin and Nebraska the top two in the country.

"It’s a robust schedule, no question. I’ve always found that knowing how rigorous the Big 10 is going to be, kind of tip-toeing around preseason, I don’t think that’s really good. If we’ve got spaces in our game, I’d rather find out early," McCutcheon said. "The goal is to be the best we can be in December, and if we happen to be good in August and September, then cool. The goal is to learn and compete and try to get ready for what we know is going to be a really tough conference schedule."

The Gophers finished 23-9 last season, 15-5 in Big Ten play and made a run to the NCAA Elite Eight. Under McCutcheon, Minnesota has been to the NCAA Tournament nine times, and had seven straight seasons with a run at least to the sweet 16. Their last Final Four came in 2019.

The Gophers are led by preseason All-Big Ten picks in libero CC McGraw, a graduate student, and junior hitter Jenna Wenaas. McGraw earned First Team All-Big Ten honors last season after finishing second in the league at 4.59 digs per set. She was the only player to play every set last season after missing parts of 2022 with injuries.

McGraw said the decision to return for one final year, with eligibility because of the COVID-19 pandemic, was easy.

"It was kind of a no-brainer for me right as I found out that we could get another year of eligibility. I was like perfect, I can start grad school and get a program under my belt," McGraw said. "Having one final run at it with my teammates and my amazing coaching staff was definitely the biggest thing for me."

Landfair is happy to be back on the court with her teammates after missing most of last season. She came to the Gophers as the No. 1 recruit in the country, and played nine games last season as a sophomore before going down with an injury. She was an All-America Honorable Mention and First Team All-Big Ten pick as a freshman.

She had to spend most of last season being a teammate on the bench, but now she’s back.

"I know it wasn’t cool to get hurt, but I do think there was some valuable lessons learned and I think that’s going to hold her in good stance. We’re excited to have her back out there," McCutcheon said.

The Gophers are picked to finish third in the Big Ten this season, behind Wisconsin and Nebraska. But the goal is the same it has been virtually every year under McCutcheon: Face tough completion early to be ready for the league schedule, compete for a Big Ten title and get in a good spot to make an NCAA Tournament run.

"I just want to win some games and compete and play with my teammates. It’s all or nothing," McGraw said.