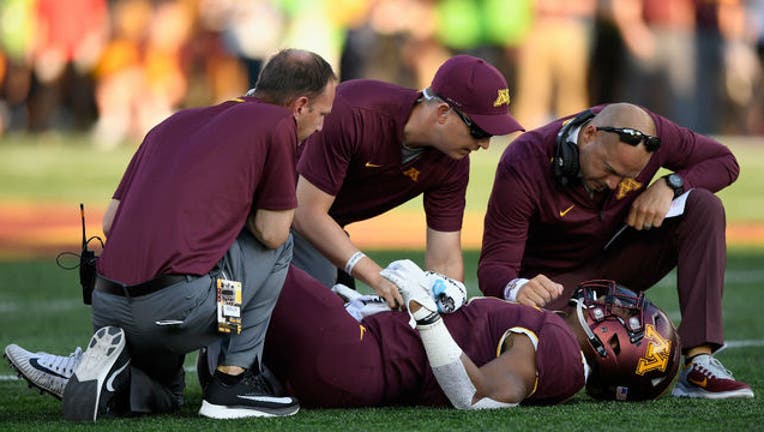 Head coach P.J. Fleck of the Minnesota Golden Gophers with the trainers checks on Rodney Smith after an injury during the game against Fresno State on September 8, 2018 at TCF Bank Stadium in Minneapolis. (Photo by Hannah Foslien/Getty Images)

MINNEAPOLIS (KMSP) - Minnesota Gophers running back Rodney Smith is out for the rest of the season after suffering a knee injury early in Saturday's game against Fresno State, the team confirmed Monday.

Smith, 22, suffered a left knee injury after making a catch during the third play of the game.

"I am devastated for Rodney, but I know he will keep his oar in the water and continue to move forward and attack his rehabilitation process," head coach P.J. Fleck said in a statement. "He is a leader on this team and I look forward to him working with our young players as we continue to grow this season."

In 39 career games, Smith has rushed for for 2,959 yards on 651 carries. Fleck said the Gophers will file a waiver for a sixth year of eligibility with the NCAA right after the season is over.

"We believe Rodney meets all the requirements for the waiver and fully expect that it will be granted," Fleck said.