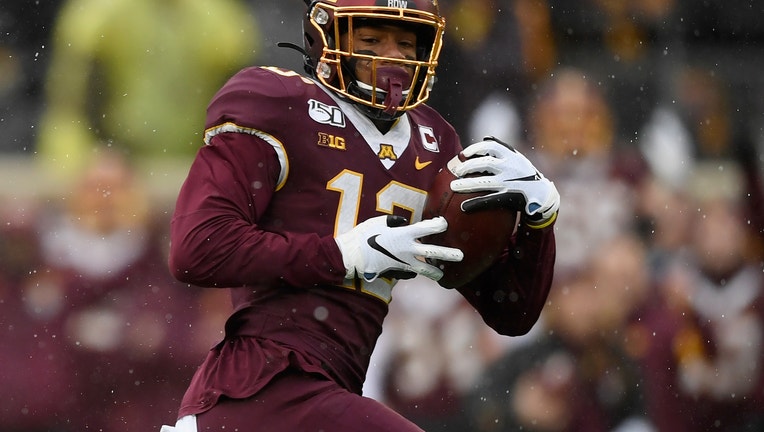 MINNEAPOLIS, MINNESOTA - NOVEMBER 30: Rashod Bateman #13 of the Minnesota Golden Gophers carries the ball against the Wisconsin Badgers during the first quarter of the game at TCF Bank Stadium on November 30, 2019 in Minneapolis, Minnesota. Bateman s (Hannah Foslien/Getty Images / Getty Images)

MINNEAPOLIS - The 2021 NFL Combine is about three months away, and two former University of Minnesota football stars will get a chance to showcase their talents in front of pro scouts and coaches.

Gophers’ receiver Rashod Bateman, and defensive back Benjamin St.-Juste each received invites on Thursday to the biggest pre-draft event in football. This year, it will be held April 29-May 1 in Cleveland Ohio.

Bateman will go down as one of the greatest receivers in the history of Gophers football. He was named the Big Ten Receiver of the Year in 2019 and a First Team All-Big Ten pick after setting school records in receiving yards (1,219) and touchdowns (11). He also set a TCF Bank Stadium record with 203 receiving yards in a historic 31-26 win over Penn State.

Bateman played five games in 2020, making 36 catches for 472 yards and two touchdowns. He didn’t play in the last two games, opting out of the remainder of the season after the Gophers had to cancel two games due to COVID-19 issues within the program. Bateman is projected to be a first round pick.