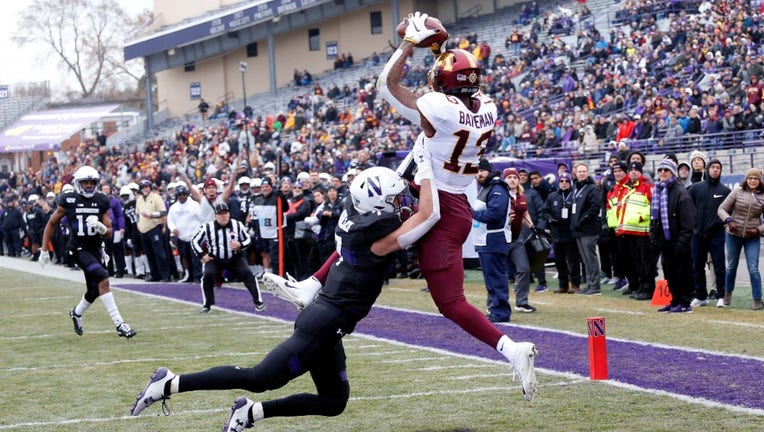 Rashod Bateman #13 of the Minnesota Golden Gophers makes a catch for a touchdown in front of Travis Whillock #7 of the Northwestern Wildcats during the first quarter at Ryan Field on November 23, 2019 in Evanston, Illinois. ((Photo by Nuccio DiNuzzo/Getty Images))

MINNEAPOLIS - University of Minnesota football fans should probably accept the reality that 2020 could be the final season for Rashod Bateman in a Gophers’ uniform.

Bateman was one of several offensive stars as Minnesota had an 11-2 season in 2019, capped with a win over Auburn in the Outback Bowl on New Year’s Day. It’s the Gophers’ best season in 115 years. It’s just the second time in 115 years they’ve won at least 10 games in a season, the other coming in 2003.

Minnesota set a record with five players taken in the 2020 NFL Draft, highlighted by Antoine Winfield Jr. going to the Tampa Bay Buccaneers in the second round. So what’s the outlook for the 2021 draft? At least one highly-respected draft analyst not only has Bateman being a first round pick, but going in the top 10.

ESPN’s Mel Kiper Jr. released his first big board for the 2021 NFL Draft on Tuesday. He has Bateman going No. 8 overall. Bateman is entering his junior season with the Gophers and if his trajectory holds, he could declare for the next draft. That’s assuming we have a college football season, and there are no delays due to the Coronavirus pandemic.

The Gophers haven’t had a first round pick since Laurence Maroney went No. 21 overall to the New England Patriots in 2006. Minnesota’s last top 10 pick? Defensive tackle Carl Eller went to the Vikings with the No. 6 pick in 1964.

Bateman is coming off a career year with the Gophers, and one of the best seasons a Minnesota wide receiver has ever had. He was named the Big Ten Receiver of the Year and a First Team All-Big Ten pick after making 60 catches for 1,219 yards and 11 touchdowns. The numbers for yards and touchdowns as a sophomore are school records.

Bateman was named a finalist for the Biletnikoff Award, which goes annually to the top receiver in college football. He was also named a Third Team All-American by the Associated Press.

He’s caught at least one pass in all 26 games he’s played as a Gopher and has more than 1,900 career receiving yards in two seasons. Bateman has seven career 100-yard receiving games, and his 51 catches for 704 yards as a freshman were both school records. His six touchdowns were second-most in school history for a freshman.

Bateman averaged more than 20 yards per catch last season, and got 2019 off to an explosive start with a 42-yard, one-handed touchdown catch in the season-opener against South Dakota State. He’s got four career multi-touchdown games, including a 7-catch, 78-yard and three touchdown performance at Northwestern last season. Bateman also had six catches for 177 yards and two scores in the Big Ten opener at Purdue last season.

Kiper’s analysis has Bateman as a big-play threat with his speed, elite route-running and exceptional hands. Bateman is 6-2 and put on muscle before the 2019 season, growing to 210 pounds. His challenge in 2020 is taking the next step without Tyler Johnson, who is now with the Tampa Bay Buccaneers.

Enjoy Bateman’s junior season with the Gophers, assuming it doesn’t get canceled due to the Covid-19 pandemic. If his top-10 projection holds, it’s probably his last season in Minnesota.