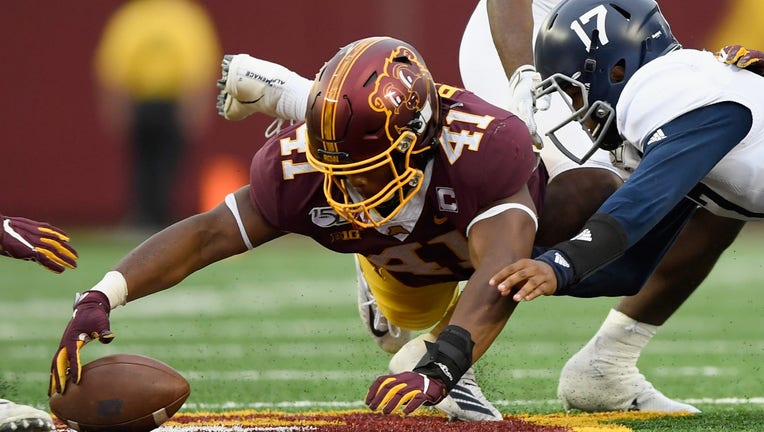 Thomas Barber #41 of the Minnesota Gophers recovers a fumble against Justin Tomlin #17 of the Georgia Southern Eagles during the fourth quarter of the game at TCF Bank Stadium on September 14, 2019 in Minneapolis, Minnesota. The Gophers defeated the ((Photo by Hannah Foslien/Getty Images))

MINNEAPOLIS - PJ Fleck is teaching life lessons while also trying to navigate through the University of Minnesota’s 2019 football schedule.

After all, Fleck says he’s a sixth grade social studies teacher at heart. There are two ways the Gophers’ 3-0 non-conference schedule can be looked at: They’ve won all three games and that’s all that really matters. The scores have also been far too close for comfort against what should be considered inferior competition, despite the three being a combined 32-8 last season and all winning at least 10 games.

Gophers gear up for conference play against the Purdue Boilermakers. Defensive back Chris Williamson discusses his role on the Minnesota defense.

They’ve faced two FCS opponents in South Dakota State and Georgia Southern, and a Mountain West Conference opponent in Fresno State. Minnesota fell behind all three opponents in the fourth quarter, yet the Gophers find themselves 3-0 heading to Purdue to open Big Ten play on Saturday.

“There were eight Mountain West teams that beat Power 5 schools this year, we weren’t one of them. So when you look at the Group of 5 and you look at whatever it is, these were champions that we were playing against of their respective conferences and we had to find a way to win,” Fleck said. “We found a way to be 3-0. Well how did we get to that and what are the things that made us that? That’s what we want to focus on."

Morgan has had to engineer three fourth-quarter comebacks to get the Gophers off to a 3-0 start. Against South Dakota State, Rodney Smith and Mo Ibrahim ran the ball down the field as the Gophers escaped their season-opener with a 28-21 win over the Jackrabbits. Morgan drove the Gophers down the field at Fresno State and forced overtime with a touchdown to Chris Autman-Bell.

Against Georgia Southern, Morgan threw three touchdown passes to Tyler Johnson, including the game-winner in the closing seconds. Should it have come to that to get to 3-0? Probably not, but that doesn’t matter anymore.

Fleck said earlier this week he has a framed picture in his office of the team’s 3rd-and-29 situation against Georgia Southern. Morgan hit Demetrius Douglas on consecutive passes to keep the drive, and the game, alive.

“It’s a powerful picture because at that moment there were a lot of people who thought we were going to lose that game. People always say what’s the hardest thing about the University of Minnesota’s job and I said changing people’s thoughts, perceptions and ideas,” Fleck said. “This team’s got something to them, what that is we’ll find out over the course of the next 10 weeks, but they have something to them and it’s special.”

Fleck added, "The results at the end of the game after 60 minutes, you look up and see what the score is. But it’s how you got there. We have to be better at the things we need to get better at that got us to that result. There’s things that happened in our game that maybe I haven’t seen in a whole year of football, let alone in the last six minutes of a game. But they were able to overcome that."

Now, the page turns to Purdue. The Boilermakers are 1-2 with losses at Nevada and to TCU last week, with a win over Vanderbilt in the middle. There are some questions at quarterback, with Elijah Sindelar missing last week’s game with concussion issues.

But make no mistake, the centerpiece of Purdue’s offense is All-American receiver Rondale Moore. He had 13 catches for 220 yards and a touchdown in their win over Vanderbilt. He also led the Boilermakers’ to their upset win over Ohio State last season.

The importance of getting off to a good start in the Big Ten season isn’t lost on senior defensive end and Maple Grove native Sam Renner, who has 11 tackles and one sack through three games. He referenced the Gophers’ 3-0 start last season before they got run over at Maryland in a 42-13 loss.

They went 0-4 to start the conference season.

“We’re being very careful this year to recognize that once you get into Big Ten play, anybody can beat anybody. You’ve got to show up and play, nobody is going to hand you anything,” Renner said.

There are plenty of things to improve on as the Gophers head to Purdue. They’re looking for more consistency on the offensive line as they’re running for just 2.6 yards per carry through three games, which ranks 12th in the Big Ten. They’re also 10th in passing at 233 yards per game, despite having two of the best receivers in the Big Ten in Tyler Johnson and Rashod Bateman.

Minnesota's defense is 11th in the league with just six sacks. Purdue is the top passing team in the Big Ten at 371 yards per game.

Last year, the Gophers beat Purdue at TCF Bank Stadium 41-10 a week removed from Joe Rossi replacing Robb Smith as defensive coordinator. Minnesota scored 38 straight points in that game, and it was the start of wins in three of the last four games to end the season.

The Gophers are 7-2 in their last nine games, they’ve won five straight dating back to the end of last year and they’ve won five of the last six match-ups against Purdue. But life on the road in the Big Ten is never easy, and that won’t change Saturday at Purdue.

“Purdue is an elite team. We’ve got to be able to be prepared to win a dogfight,” Morgan said.