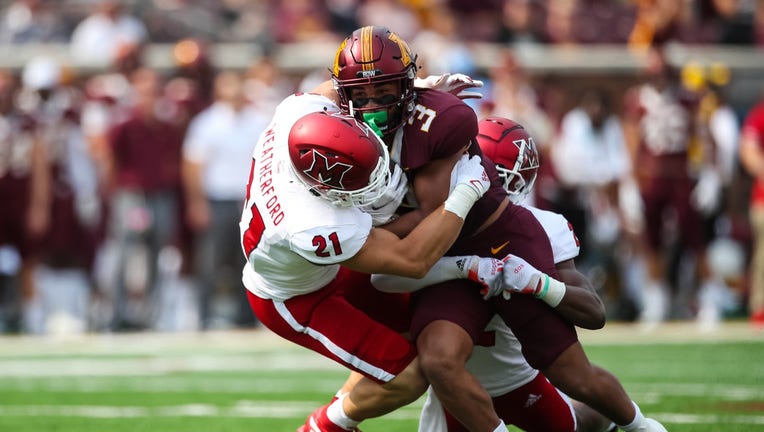 MINNEAPOLIS - The University of Minnesota football team is in Boulder to face Colorado on Saturday, looking to extend the longest non-conference win streak in the nation.

The Gophers have won 20 straight games away from Big Ten play. Their last non-conference loss was the 2015 season-opener to TCU, when Jerry Kill was the head coach, and the Horned Frogs were ranked No. 2 in the country at the time.

The Gophers are coming off a 31-26 win over Miami (Ohio) last Saturday to get their first win of the season. They were carried by Trey Potts, who ran 34 times for 178 yards and two touchdowns. Minnesota had a dominant first half with a 21-3 lead before the Redhawks scored 17 straight points to make it a one-point game in the fourth quarter. The Gophers made enough plays late to hold on.

We'll find out if Minnesota's top receiver, Chris Autman-Bell, makes his 2021 debut on Saturday. Autman-Bell has practiced the last two weeks, and dressed for warm-ups against both Ohio State and Miami before watching both games from sideline in street clothes. Autman-Bell suffered a leg injury during fall camp. In his absence, Dylan Wright leads Gophers' receivers with 130 yards and two touchdowns. Daniel Jackson also scored his first career touchdown against the Redhawks.

The Buffaloes are coming off a 10-7 loss to Texas A&M, where they had a lead until the last four minutes of the game. Colorado is 2-0, and has allowed just 17 points through two games.

Saturday’s game is on the Pac-12 Network, so check your cable listings and streaming services to make sure you can watch the action. The game will also be broadcast locally on KFAN Radio. There will be plenty of maroon and gold in the stands as Gophers’ fans bought the initial 3,000 tickets allotted to the visiting team.

The two teams kick off a noon local time.