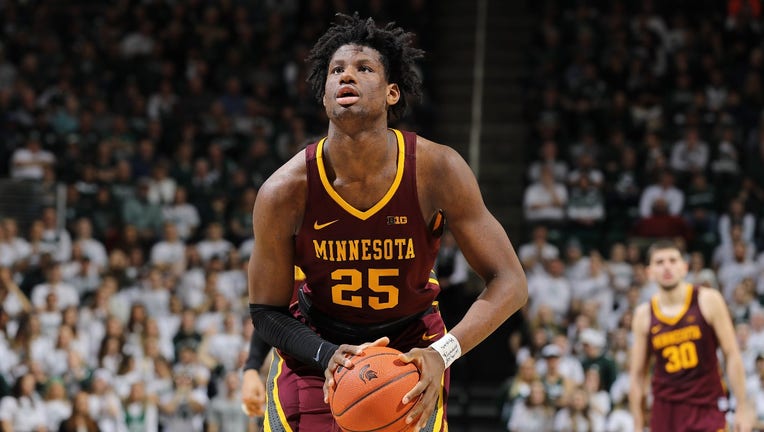 Daniel Oturu #25 of the Minnesota Golden Gophers shoots the ball and draws a foul from Julius Marble #34 of the Michigan State Spartans at the Breslin Center on January 9, 2020 in East Lansing, Michigan. ( (Photo by Rey Del Rio/Getty Images) )

MINNEAPOLIS - Sophomore center Daniel Oturu has quickly emerged as one of the top players in the Big Ten, and he’s starting to gain national attention.

For the second straight week, the Gophers’ star was named the Big Ten Co-Player of the Week. Oturu scored 30 points, grabbed seven rebounds and returned from a second half shoulder injury to lead the Gophers past No. 19-ranked Michigan 75-67 on Sunday at Williams Arena.

Oturu shot 13-of-18 from the field, and scored 20 of his 30 points in the first half. It comes after he had a double-double 22 points, 10 rebounds and added two blocks in Minnesota’s 74-58 loss at Michigan State last Thursday.

Oturu has scored at least 20 points in nine games, and leads the Big Ten in rebounding with 11.9 per game. He has 10 double-doubles on the season, tied for the Big Ten lead and fifth nationally. His 19.9 points per game leads the Gophers and is second in the Big Ten.