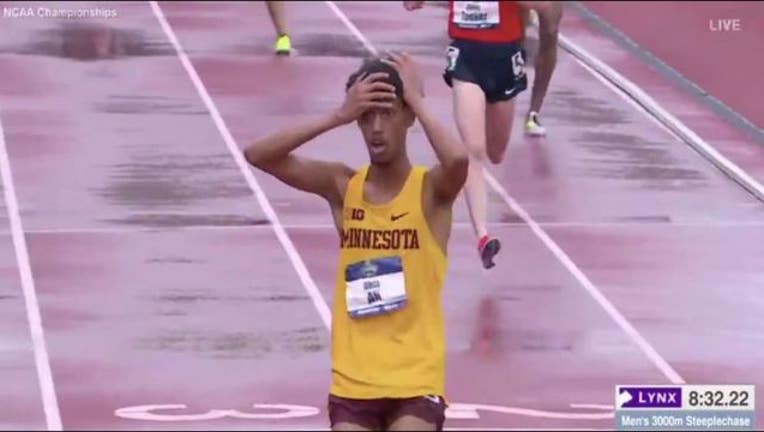 EUGENE, Ore. (KMSP) - Minnesota Gopher Obsa Ali captured a national championship with a come-from-behind victory in the 3,000 meter steeplechase at the NCAA Division I Outdoor Track and Field Championships.

Ali broke his own school record to finish at 8:32.23 in the event at Hayward Field in Eugene, Oregon. He took the lead in the final lap to secure Minnesota's first national championship in steeplechase.

The Richfield, Minn. native started running steeplechase only about a year ago.

“I still can’t believe it," said Ali in a press release. "I remember last year, I was watching this race from the stands. I was very disappointed, and [Coach Plasencia] actually made me come back to watch it. I knew I didn’t want to have that feeling again this year."

Ali is the first Gopher to win a national championship since 2015 when Luca Wieland won the indoor heptathlon. However, it is the first outdoor title since 2003 when Adam Steele won the 400 meter.

With his victory, Ali became the 14th national champion in the U of M men's track and field program.