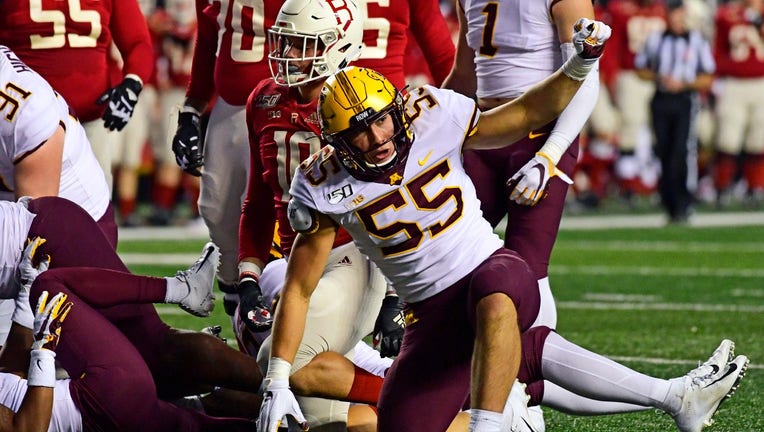 Mariano Sori-Marin #55 of the Minnesota Golden Gophers looks to the sideline during the fourth quarter at SHI Stadium on October 19, 2019 in Piscataway, New Jersey. Minnesota defeated Rutgers 42-7. ((Photo by Corey Perrine/Getty Images))

MINNEAPOLIS - University of Minnesota linebacker Mariano Sori-Marin was named the Big Ten Defensive Player of the Week on Monday after helping lead the Gophers to a 24-17 win at Nebraska on Saturday.

Sori-Marin led the Gophers’ defense with 18 tackles on the day, and forced a fumble. His 18 tackles in a single game are the most for Minnesota since Blake Cashman had 20 against Northwestern back in 2018.

After struggles earlier this season, Sori-Marin and the Minnesota defense had their best game of the season against Nebraska.

"He’s a Big Ten linebacker, he is incredibly intelligent, he is so smart. In the beginning of the year, he was trying to do everybody else’s job," Gophers coach P.J. Fleck said. "I thought he had a phenomenal game, it’s feather in his cap but it’s really a team defense award of how hard everybody played to be able to give him the opportunity to make those plays."

Sori-Marin leads the Minnesota defense with 47 tackles through six games. He’s the first Gophers’ defensive player to win a weekly award this season, and first player to get an award since Mo Ibrahim won Offensive Player of the Week on Nov. 9. Ibrahim got the honor after consecutive 200-yard rushing games, and a win at Illinois.

Sori-Marin is the first Minnesota defensive player to be honored since Antoine Winfield Jr. last November.

The Gophers’ win at Nebraska was their first game in 22 days, after the team had to pause football activities due a rise in COVID-19 cases within the program.

Minnesota will travel to Wisconsin this Saturday as the Big Ten announced Sunday its match-ups for Champions Week. The Gophers’ game at Wisconsin back on Nov. 28 was one of two games Minnesota had to cancel due to COVID-19 issues.