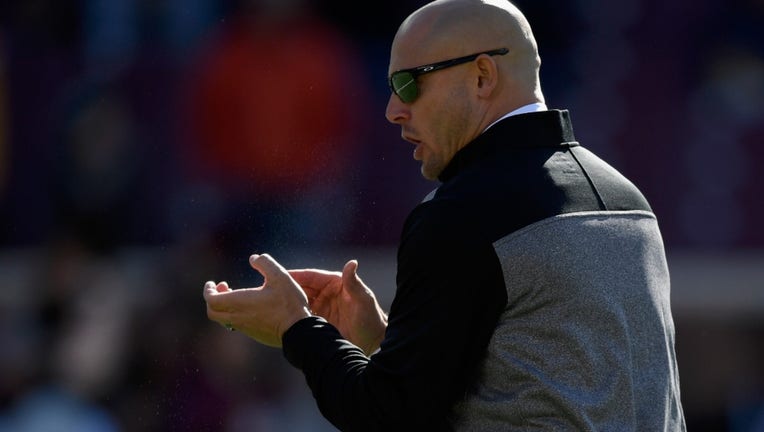 Head coach P.J. Fleck of the Minnesota Gophers looks on before the game against the Maryland Terrapins at TCF Bank Stadium on October 26, 2019 in Minneapolis, Minnesota.  ((Photo by Hannah Foslien/Getty Images))

MINNEAPOLIS - The University of Minnesota football team is a little more than a week away from opening the 2021 season against Ohio State, and the battles the Gophers will face this season will be more than just the ones on the football field.

Big Ten officials announced on Monday that if a team can’t field enough players to play a game due to COVID-19 issues, the game will not be rescheduled and they’ll take a forfeit. The game will be considered a loss for the team impacted by COVID-19, and a win for the opponent. If both teams are unable to play, the league will review all options and consider the game a "no contest."

Last year, the Gophers had two games canceled due to a COVID-19 outbreak within their own team. They also had multiple players out between injuries and COVID-19 issues in wins over Purdue and Nebraska.

Gophers coach PJ Fleck said Monday for his team, it’s about controlling what you can amid the uncertainty of an ongoing pandemic.

"There’s people that are way above me that make those decisions. Making decisions that keep student athletes at the forefront of everything and their health and safety and well-being. I’m all for things like that," Fleck said. "If it happens to turn out that way it’s somewhat in your control and somewhat out of your control, we look at it as we do everything we can to make sure we can control that with education and doctors educating our players and staff of the facts of what things are."

Fleck on Monday provided an updated on top receiver Chris Autman-Bell that’s potentially good news. Autman-Bell suffered a leg injury during an open practice at Huntington Bank Stadium, and had to be helped off the field by teammates and trainers.

If he can’t play on opening night, it’ll be up to Daniel Jackson, Dylan Wright, Michael Brown-Stephens, Clay Geary and Brady Boyd to carry the load at receiver.

Fleck has stated the entire offseason he wants this Gophers squad to be the closest and most together he’s had as he enters his fifth season at Minnesota. As he’s done every year during fall camp, he got the team together for a trip to Fort Snelling National Cemetery.

The team got a chance to see how grave stones are placed, and got a perspective of those who have died serving the country so they can have to the freedom to attend school and play football.

"That’s the ultimate team with the ultimate sacrifice and we bring them there every single year. No matter what your views and beliefs are with our society, we can all go there and pay our respects to the people who fought for our country to allow us to have the freedoms we have to play football every day," Fleck said. "These are people’s lives, this isn’t a game, these are lives. There’s nothing average about that cemetery, and there’s nothing average about the people that are in that cemetery."

The football team posted a video on social media recently, unveiling the Gophers’ uniforms for opening night against Ohio State at Huntington Bank Stadium. With every player in the locker room in complete dark, the lights turned on to a mannequin with a black jersey and pants with maroon trim and white lettering, and a maroon helmet with a black "M."

Based on the player reaction in the locker room, they’ll be ready for the Buckeyes. It's a game you can see on Fox 9.