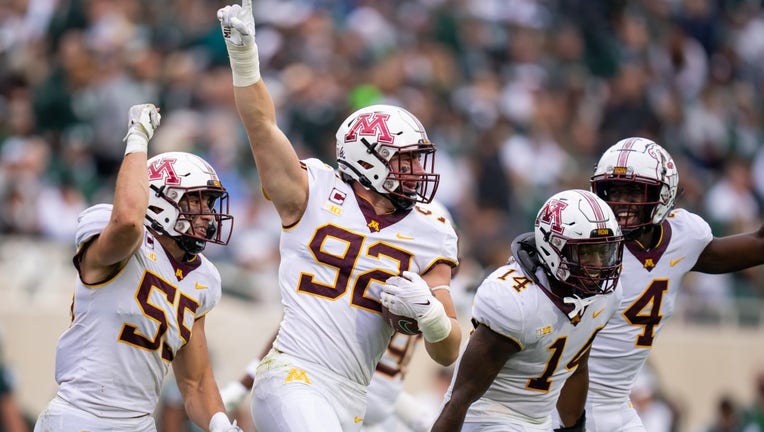 Danny Striggow celebrates with defensive teammates after getting his first career interception in Saturday's 34-7 win at Michigan State. (credit: University of Minnesota Athletics))

MINNEAPOLIS - The University of Minnesota football team had just taken a 24-0 lead at Michigan State Saturday in the third quarter when a landmark moment happened for Danny Striggow.

The defensive lineman from Orono was reading Spartans’ quarterback Payton Thorne, who was trying to throw a screen pass. Striggow got his right hand up, deflected it and completed the catch for his first career interception. It’s not every day a lineman gets a turnover that’s not a fumble.

"It was pretty special. Screen drills are something you do every day in practice. You don’t always get to see them, they don’t always turn out like that. It’s just one of those things where something you practice shows up on the field," Striggow said. "Opportunity came my way and I was able to make a play."

Gopher Coach PJ Fleck provides an update after the team's weekend win over Michigan State and the team being ranked in the top-25 for the first time in nearly two years.

Even more special – Both of Striggow’s parents are Michigan natives, and his mom attended Michigan State. They’re Gophers’ fans now, and more than 40 friends and family got to see Striggow play in East Lansing. Striggow has gotten spot duty in four games this season, and has made his presence felt with two sacks to go along with his first interception.

"There’s a standard we hold in the defense as a whole. Somebody comes in for whoever, there’s no drop off," rush end Thomas Rush said. "With Danny, there’s been none of that. Danny has shown he’s very capable of playing up to that level, and above that level. That snag he had, I was amped for him."

The Gophers enter Saturday’s Homecoming tilt against Purdue the No. 1-ranked total defense in the country, allowing just 187.8 yards per game. They have playmakers at every level, with Jordan Howden, Terell Smith and Justin Walley all having interceptions. Rush forced a fumble Saturday that Walley recovered. Six different players have sacks.

The starting defense hasn’t allowed a touchdown in four games.

"Right now, we’ve got a really special group of guys on defense and sometimes you’ve got to take a step back and realize that you’re playing with some really good guys," Striggow said. "When you see a different guy making a play, it’s pretty special to know that not only are you playing next to that guy, but you’ve got that guy behind you having your back."

Top receiver Chris Autman-Bell couldn’t be in East Lansing on Saturday. He had season-ending right leg surgery on Wednesday, but was with his teammates in spirit back home. Autman-Bell was tweeting throughout the game, and texting players after watching them make plays during the game.

Part of the team’s locker room party included a FaceTime session with Autman-Bell.

"It was awesome to have him on FaceTime in the locker room. It was a special moment for our team, on the bus the guys were saying he was tweeting like crazy. Didn’t shock me at all, that’s the kind of dude he is," quarterback Tanner Morgan said.

Michael Brown-Stephens, who led the Gophers with six catches for 73 yards in the win, had no idea what was going on.

"I was taking off my shoulder pads at the time. My mind was on the game, we just got the win, let me get out of this stuff so we can have fun. No offense to Crab, I forgot all about him," Brown-Stephens said. "I was like ‘Oh shoot, he’s on the phone.’ He was happy for us, he was texting me throughout the game. It was really cool, he’s still leading although he can’t physically be there."

Morgan hit 10 different receivers against the Spartans, with four receivers making at least three catches. He got Big Ten Co-Offensive Player of the week after going 23-of-26 for 268 yards and three touchdowns, two to Daniel Jackson and the other to Nick Kallerup. He’s among the top quarterbacks in the country through four games.

"I’ve seen him that sharp every day. It’s cool when it gets into a game setting and it just shows how dynamic we are as a group. Anybody on the field can make a play," Brown-Stephens said.

Mo Ibrahim’s first touchdown of the day was historic for the sixth-year senior. It was the 41st of his career, passing Darrell Thompson career touchdowns with the Gophers among running backs. Ibrahim did it in 32 games.

Ibrahim is second in the country with 141.8 yards per game, and his eight rushing touchdowns are second only to Michigan’s Blake Corum.

"The 41 one was pretty cool just because it was a historical touchdown. Every one is cool, I don’t take it for granted watching him run," Morgan said.

Ibrahim rarely goes down on first contact. His record-tying and breaking scores were after breaking tackles.

"I’m a fan of lions. I would call him a lion, he just never stops. He’s ferocious, you can’t bring him down by yourself. I like watching it, I get caught watching it sometimes when I’m blocking," Brown-Stephens said. "Mo, he’s special. That guy, I don’t know how he does it."