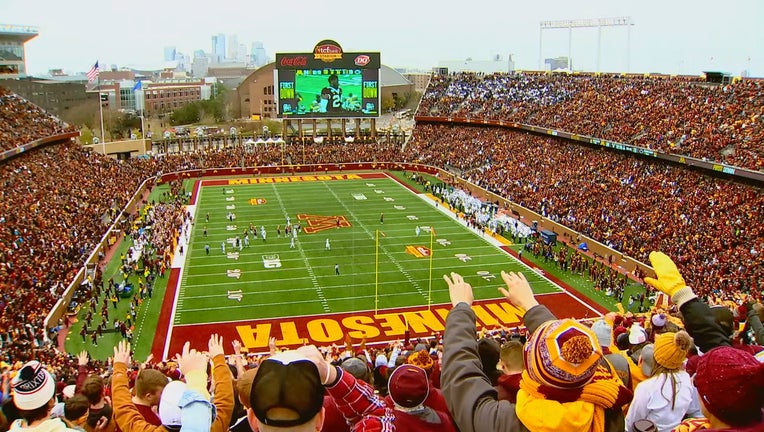 MINNEAPOLIS - The University of Minnesota football team has high expectations for the 2021 season, but national experts and even other coaches aren’t drinking the Gophers’ Kool-Aid just yet.

The USA Today released its preseason Coaches Poll on Tuesday, and not surprisingly, the Gophers are not one of the teams ranked in the top 25. Not only aren’t they ranked, they didn’t receive a single vote. Minnesota is coming off a 3-4 season in 2020, altered by injuries and COVID-19 issues.

What the Coaches Poll did reveal on Tuesday is that the Gophers will play at least four ranked opponents in 2021. That starts with arguably their toughest game of the season right out of the gates on opening night. Minnesota will host No. 4-ranked Ohio State, the defending Big Ten champion, on Sept. 2 at the newly-named Huntington Bank Stadium.

The Big Ten has five ranked teams to start the season. Minnesota closes out the regular season Nov. 27 against Wisconsin, ranked No. 15 in the preseason poll. The Badgers went 4-3 last season, including ending the regular season with a 20-17 win over the Gophers.

The week before that, the Gophers travel to Indiana, which is ranked No. 17 to start the season. The Hoosiers might have been the surprise of the Big Ten last year, finishing 5-2. They got off to a 4-0 start before losing a tight game to Ohio State, 42-35.

The other preseason ranked opponent the Gophers have this season is Iowa, which comes in at No. 18. The Hawkeyes finished 6-2 last season, including a 35-7 win over Minnesota. The Gophers also went to Iowa City two years ago with a 9-0 record and a chance to contend for a Big Ten West title, but suffered a 23-19 loss to the Hawkeyes.

Fleck enters his fifth season at Minnesota with a 26-19 record, including 15-19 in Big Ten play and 1-7 against Iowa and Wisconsin.

With all but two starters from last season back, and the entire offensive line returning along with Big Ten Running Back of the Year Mo Ibrahim, optimism for the Gophers in 2021 is as high as it’s ever been. Now they just have to go prove it to everybody else, and that starts with the Buckeyes on Sept. 2.