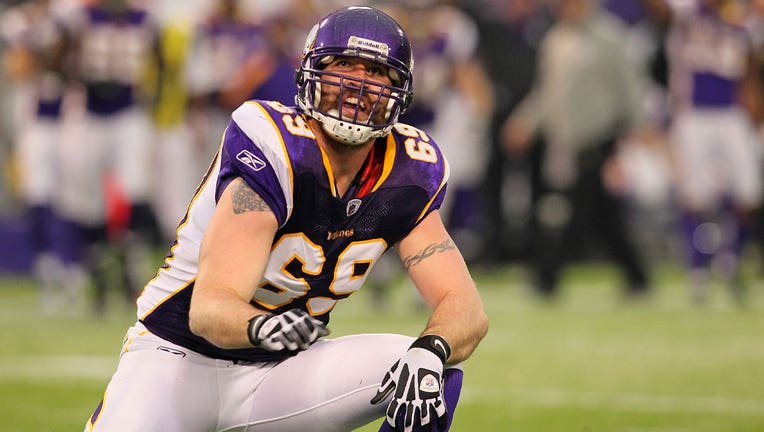 Jared Allen #69 of the Minnesota Vikings celebrates his sack Josh McCown #15 of the Chicago Bears to set a franchise record of 22 sacks for the season at the Hubert H. Humphrey Metrodome on January 01, 2012 in Minneapolis, Minnesota. (Adam Bettcher / Getty Images)

(FOX 9) - For the second year in a row, Jared Allen has been named a finalist for the Pro Football Hall of Fame.

Allen is among the names that could make it in as part of the Class of 2022.

Allen was up for the honor last year but didn't get a gold jacket in his first year of eligibility amid a loaded 2021 class that included inductees Peyton Manning, John Lynch, Calvin Johnson, Alan Faneca, and Charles Woodson.

Allen spent six years in Minnesota between 2008 and 2013 and, before that, four years in Kansas City. Over his entire career, he racked up 136 total sacks, 32 forced fumbles, and 648 tackles in 187 games including a league-leading 22 sacks in the 2011 season with the Vikings, which was also a franchise record.

He ranks 12th on the all-time sack list, just 1.5 sacks behind another Vikings great and Hall of Famer John Randle (10th all-time).