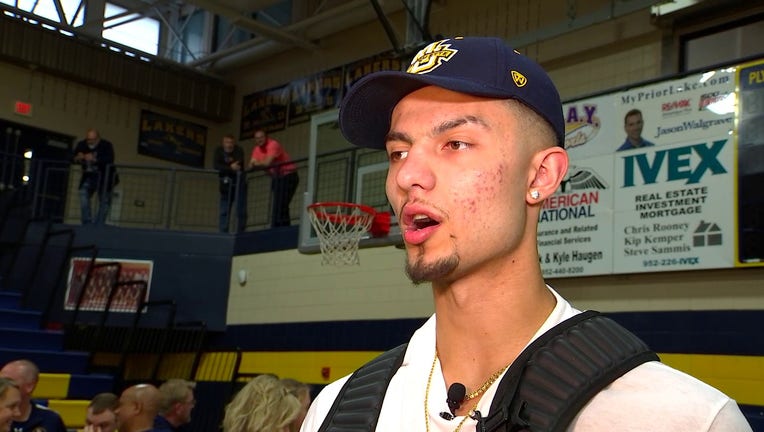 MINNEAPOLIS - The University of Minnesota men’s basketball team wasn’t able to keep Prior Lake basketball star Dawson Garcia home two years ago, when he was a top-30 recruit nationally and McDonald’s All-American.

But the second time might be the charm for the Gophers and Ben Johnson. Garcia, a 6-11 forward, announced Wednesday morning he’s leaving North Carolina and entering the NCAA transfer portal. Garcia was not with the team during the Tar Heels’ run to the national championship game.

"Congratulations to all of Tar Hell Nation on a great finish the season! With all that has happened with my family this past year, I have decided to stay in closer proximity to them. Thank you Tar Hell Nation for accepting me into your family… All the best!" Garcia posted to social media.

Garcia left school in February to return to Minnesota as his family was dealing with several medical issues. His grandmother passed away, and his father nearly died around Christmas with COVID-19.

In 16 games and 12 starts with the Tar Heels, Garcia averaged nine points, 5.5 rebounds and better than 37 percent shooting from the perimeter. Garcia originally chose Marquette out of high school, and averaged 13 points and 6.6 rebounds per game. He left Marquette after head coach Steve Wojchiechowski was fired.

The NCAA grants student-athletes a one-time transfer without penalty, which Garcia used to leave Marquette for North Carolina. Johnson and the Gophers will be in pursuit of the talented big man, and if he were to choose to stay home to play for Minnesota, he would need a medical hardship waiver from the NCAA to be immediately eligible for the 2022-23 season.

He would get the chance to be an immediate starter and impact player for the Gophers. They lost seven players from Johnson’s first team, including post players Eric Curry, Charlie Daniels and Danny Ogele. Garcia would enter a mix that already includes Parker Fox, Treyton Thompson and Pharrel Payne. Both Fox and Ihnen are returning after missing the 2021-22 season with knee injuries.

Johnson and the Gophers already have three Minnesota natives coming for the 2022-23 season in freshmen Braeden Carrington, Payne and Joshua Ola-Joseph. Garcia is also close friends with Jamison Battle, who led the Gophers in scoring this past season.

Johnson led the Gophers to a 13-17 record in his first season, and the team already looks to be far more competitive heading into next year.