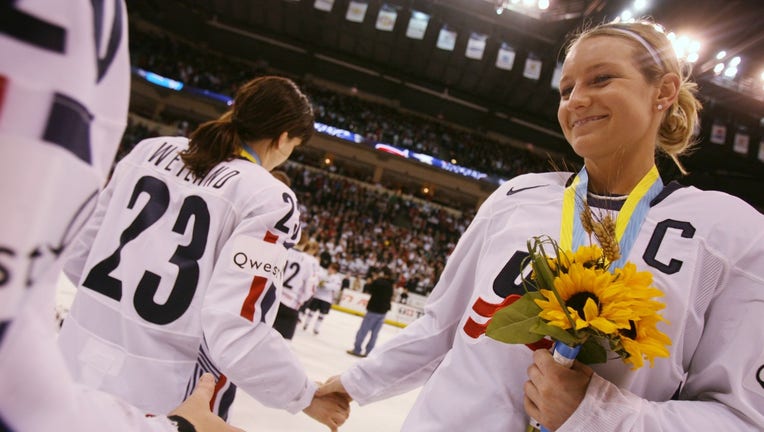 Krissy Wendell #7 of the USA congratulates her team members after losing to Canada 5-1 to claim the silver medal at the IIHF Women's World Championship Gold Medal game at MTS Centre on April 10, 2007 in Winnipeg, Canada.  ((Photo by Christopher Pike/Getty Images))

MINNEAPOLIS - One of the best female hockey players to ever come out of Minnesota is taking her talent to the NHL.

Krissy Wendell-Pohl, a state champion at Park Center who went onto become a star at the University of Minnesota, has been hired as an amateur scout by the Pittsburgh Penguins. Pohl, 40, led the Gophers to consecutive national titles in 2004 and 2005, and won silver medals with the U.S. Women’s Hockey Team in 2002 and 2006. She was a captain on Team USA that won the 2005 gold medal at the Women’s World Championships.

Wendell set an NCAA record in the 2004-05 season with seven short-handed goals. Her 237 career college points are top-10 all-time in the NCAA. Wendell-Pohl was inducted to the U.S. Hockey Hall of Fame in 2019.

After her playing days, Wendell-Pohl has been a high school hockey coach with her husband, Johnny Pohl, and took a job in 2018 as Hill Murray’s Middle School Admissions Director.