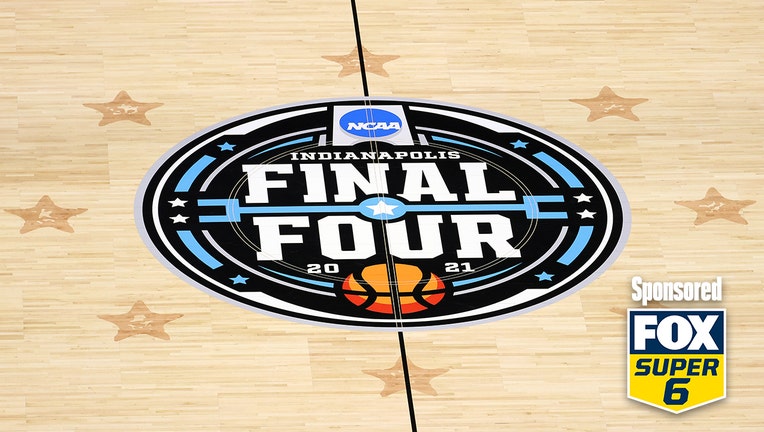 A detail view of the center court logo is seen ahead of the Final Four Semifinal at Lucas Oil Stadium on April 02, 2021 in Indianapolis, Indiana. (Photo by Andy Lyons/Getty Images)

For the past 40 years, college basketball has largely been ruled by teams from east of the Mississippi River. Yet this year’s Final Four has a decidedly western feel to it.

This weekend, the last of the season, will see Baylor and Houston tip things off at Lucas Oil Stadium on Saturday afternoon, while Gonzaga and UCLA will play the nightcap, each for a berth in Monday’s national championship game.

And the final four teams can help you win $1,000 with FOX Bet’s Round of 4 Super 6 game. Just answer all six questions correctly and you could win the jackpot – absolutely for free.

All you have to do is download the FOX Super 6 app and play along. To get you prepared, here are the questions for Saturday’s games.

How many total points will be scored in the first half of the Houston vs. Baylor game?

Nothing in the last two rounds of the tournament would indicate a high-scoring game. Baylor’s defense has been suffocating, while Houston has been subject to some shooting slumps that have held their scores down.

That being said, counting on two teams being in the 20s for a Final Four game – which is what an "Under 60" pick would essentially mean – seems a bit extreme. The pick here would be the 64-67 range, perhaps with a late flurry at the end once the nerves dissipate.

How many total points will be scored in the first half of the UCLA vs. Gonzaga game?

If UCLA is able to control the tempo, then the lower end of the spectrum could certainly be in play. However, Gonzaga hasn’t been slowed down by anyone – not just in this tournament, but for this season. The feeling here is that the 73 to 75 point range just sounds right.

Which team will feature the highest-scoring player in the Round of 4?

A completely healthy Johnny Juzang would be a solid choice to win this category. The UCLA standout had one of the best performances of the tournament in the Elite Eight win over Michigan before exiting with an injured ankle for a period in the second half.

Instead, Drew Timme and Gonzaga have the most explosive offense in the tournament, and Timme has the chance to post a really big game on a combination of inside-outside offense against the Bruins defense.

Will Gonzaga cover the closing spread on FOX Bet?

As of Thursday afternoon, the Zags were – in a bit of a mixed metaphor – more than a two-touchdown favorite (14.5 points) over the Bruins. (For the record, Gonzaga hasn’t had football since 1941.)

The closest game for the Zags in this tournament was a 16-point win over Oklahoma in the Round of 32.  Out of the 30 games that Gonzaga has played this season (all victories), only one was decided by single digits – an 87-82 win over West Virginia on Dec. 4th. In other words, history would really have to be altered to not cover the spread.

Which two teams will be playing in the Championship game on Monday?

All season long, the consensus has been that the only team that could derail Gonzaga’s attempt at matching the 1976 Indiana team as the last perfect champion was Baylor.

Which team will score the most points in their Round of 4 game?

Again, the styles of all these teams lend to the answer to this question. Gonzaga averaged six more points per game than the next closest Final Four team (Baylor) during the regular season. In the tournament, that figure has doubled to almost 14 points over the Bears, who are second.

Play the FOX Super 6 Tourney Challenge all tournament long for your chance to win thousands of dollars every round! Just download the FOX Super 6 app for free and make your picks now.