Thursday Night Football on FOX is giving us a Super Bowl LI rematch between the Atlanta Falcons and New England Patriots.

The Falcons will welcome the Patriots to Mercedes Benz Stadium Thursday night. The two previously met in Super Bowl LI in which the Pats famously overcame a 28-3 deficit in the second half to win 34-28 in overtime.

The memory still haunts Falcons fans and Thursday’s meeting is sure to bring about flashbacks. Even so, much has changed in the two franchises since their 2017 meeting.

One thing that hasn’t changed: Head coach Bill Belichick has the Pats playing efficient football. The Patriots (6-4) have the sixth-ranked defense in the NFL and the 6th-best scoring offense in the league.

They’re winners of four straight and enjoyed a comfortable 45-7 win over the Cleveland Browns last Sunday. Rookie quarterback Mac Jones has completed at least 70% of his passes in six of his first 10 games, leading a passing attack that ranks in the top half of the lead.

New England seeks to make it five in a row when it faces the 4-6 Falcons, who've taken their lumps this season. Atlanta ranks near the bottom of the league in offense and defense. And ball security has been an issue as well, with the Dirty Birds losing the turnover differential by five.

Atlanta has been blown out three times this season, most recently suffering a 43-3 loss to the Dallas Cowboys last weekend. 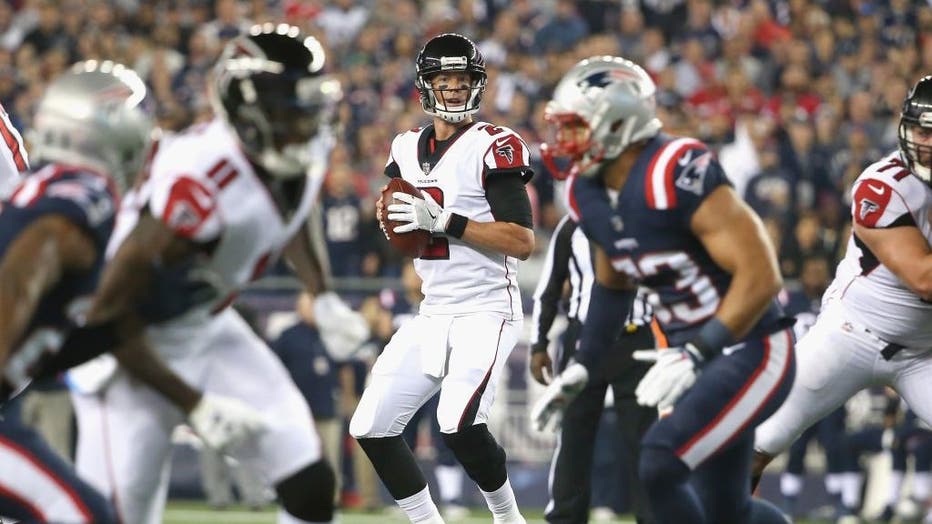 Matt Ryan, No. 2 of the Atlanta Falcons, looks to throw during the second quarter of a game against the New England Patriots at Gillette Stadium on Oct. 22, 2017, in Foxboro, Mass. (Photo by Adam Glanzman/Getty Images)

Despite their struggles, there’s plenty of time left for the Falcons to salvage their season. The New Orleans Saints and Carolina Panthers each have five wins and sit ahead of them in the divisional race.

A win Thursday would give Atlanta its fifth of the season and the Falcons could make up ground in meetings with its divisional foes in the coming weeks.

This station is owned by the Fox Corporation. This story was reported from Atlanta.